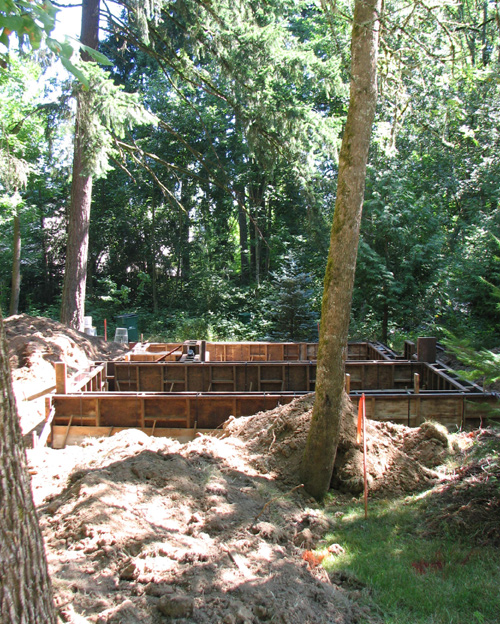 Yesterday a crew showed up and spent all day building concrete forms for the studio/greenhouse. Yes, greenhouse. I think in my excitement I failed to mention that the structure will include my studio and a greenhouse for Ray. He refers to it as "the greenhouse." I refer to it as "the studio!"  Ha!

Anyway, it was pretty fascinating to watch them pull the components from a big flatbed truck and Lego together the forms. When they finished it looked small. Tiny, even. I was not worried. I have experienced this growing/shrinking phenomenon before when we have built buildings or added rooms. On paper it looks vast. The hole looked big. The forms look small. I expect the poured concrete will look a different size and so on until it is finished. The illusion was so striking, though, that Ray took his big tape measure out and measured. Yes, it is exactly the right size. 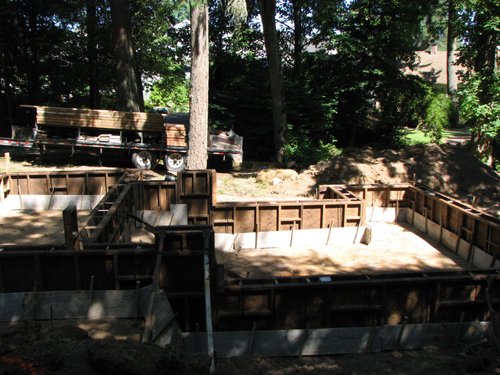 It is not a large studio, but I think it will be just right for me. I make small work. I don't do a lot of big space hogging stuff like dyeing or printing with a press. I do need storage space. There will be a small loft over the studio which will probably end up mostly as storage space.

The little bump out at the top right will be a small bathroom. It doesn't look big enough right now, but I know it will be! Here's a drawn on copy of the photo, which gives you an idea of what you are seeing here. 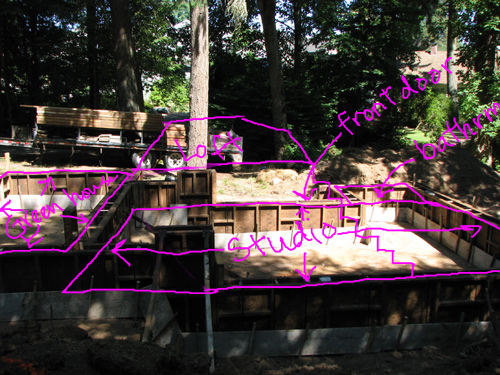 Ha! I don't know how illuminating that is. I know the loft is confusing. Imagine that it is floating above the studio with a stairway down the right side.
Posted by Terry Grant at 12:03 PM