Working in the studio

It seems I haven't shown any work I've done in a long time. I am not completely moved from the old studio space to the new and for awhile it was impossible to work, with whatever it was I needed in the space where I wasn't. I have spent several days now working in the new studio and it is lovely. There is still a lot left to move and I should be doing that, but there are things I need to finish up. 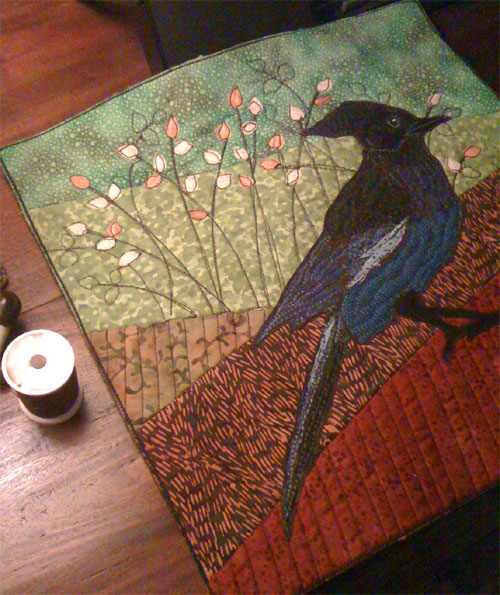 Tonight I brought this piece back to the house to do some finish work on it after dinner. Now it is waiting on the table, by the door, to go back out to the studio. I discovered I didn't have any sharp scissors in the house and ended up using the kitchen shears to cut my thread. I can see that I will need to figure some logistical matters out.

Friday I spent a large part of the day in the studio working on some things that I can't really show just yet. It was raining steadily outside most of the day, but bright and warm inside. After working in silence the day before, I unearthed my old iPod and a pair of speakers and took them out to keep me company. Ray was banging away next door in the greenhouse and popped into the studio from time to time to see what I was up to. But for most of the day it was just me and Bob Dylan and Simon and Garfunkel and Joni Mitchell and the rest of the crew. We baptized the space with good music.

I know I need to clear out the old studio, but it feels kind of nice to do it in a slow, puttering way. I am organizing and sorting as I go. Perhaps a strategy, at this point, would be to work and move what I need as I need it. That would leave, I am sure, a lot in the old space. At some point it would be clear that it was what I would never need and out it could go! Not so sure I can sell this strategy to Ray, however. He has ideas for that abandoned studio space. I am leaving Thursday morning for Houston. I'll tackle the end of the move when I get home.
Posted by Terry Grant at 10:56 PM