I used to be a good shopper. An enthusiastic shopper. I used to be well-dressed and relatively stylish. Something has happened. I have become my mother who hated to shop. She would grind her teeth and roll her eyes and moan and despair. It was embarrassing and now I am doing the same thing.

I know what the problem is. It is that I shop now because I am looking for something. Something specific that I need/want. I am not shopping opportunistically as I once did, where you just regularly browse the favored stores and you see something, quite by accident, that speaks to you. Good stuff, I have determined, must be found by accident, not by purpose.

My birthday was last month and my daughter gave me a Macy's gift card, which was such a thoughtful gift and I thought, "how great! I will use it to buy a new lightweight jacket." So I headed out to Macy's and then another Macy's and then another. That is the thing about Macy's. They are the store that ate all the real stores—the ones we loved. For me it was Meier and Frank and before that, The Bon Marche. Now they are all Macy's and Macy,s, let's be truthful here, just isn't the same as those old beloved stores. But Macy's is what we have now. And they did not have a jacket for me. Nope. Not even close. What I had in mind was something unlined in cotton duck or canvas or denim or some such. Not black. I already own all the black jackets in the world. A color. Not Navy either, and preferably not gray. Remember Barn Jackets that were popular about 10 years ago? Something like that. 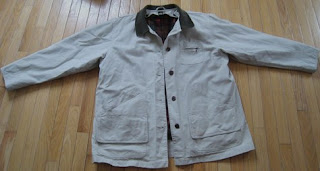 Since they did not have my jacket, I wandered through Macy's looking at other things. I found a pair of yellow shoes I liked. I've never owned yellow shoes! They did not have my size. Nor did any of the other Macy's stores I went to. Nor did Macy's online. I bought a coral colored summer shirt instead. It will probably become my favorite shirt ever. See how that works? It was not what I was looking for.

Then I went to every other store in the mall to look for a jacket. Then I left the mall and went to all the other stores. And I didn't find a jacket. And by then I was doing a fine imitation of my mother, whining and moaning and dragging myself around like a cranky old lady.

So I went to the fabric store. The only fabric that seemed possible was a pretty strange color—kind of purpley berry color. It wasn't black. I bought it. I bought buttons and thread. I could not find a pattern. I took it all home and made a copy of an old jacket I kind of liked, except made it a little longer and made the sleeves long enough to roll up a cuff. And I made my own damned jacket. And here I am wearing it with my new coral shirt and my new yellow shoes, which I finally ordered online, but not from Macy's.

I still have about $25 left on my Macy's gift card.