It has been a weird week. I am running up against the deadline for finishing the "Elements" pieces and I essentially lost two days this week. Monday morning I woke up with a stiff neck and by bedtime I was in a serious amount of pain. Did not sleep and by morning I was in such pain and fear of what might be causing it that I went straight to the Urgent Care Clinic near us. It was a strained trapezius muscle in my neck, making my neck impossible to move without screaming, hot pain and sending tentacles of pain winding up around my skull. The recommendation was rest and drugs and sleep and a soft cervical collar to support the weight of my head. So I lounged around all day on Tuesday reading and sleeping, felt a little better on Wednesday and much better today. So I was back in the studio this afternoon.

"Water" should have been easy (that's why I left it for last), but I had a hard time settling on an idea. Close to my heart is the wetland area where we walk, so that began to take shape in my head. I started with an assortment of blue, gray and tan fabrics and fused some strips to form a base.

At the end of today I had this:

I think I am nearly there. A few additions, then I will trim it to size and bind it.

Speaking of the wetland area, we had a surprise when we walked last week. Sofia was with us, and as we came around the corner near the Fanno Farmhouse, Beth and I were talking away and Sofia piped in "look at the turtle!" There, studiously digging in the dirt at the side of the trail, was a large turtle. I took its picture with my phone. 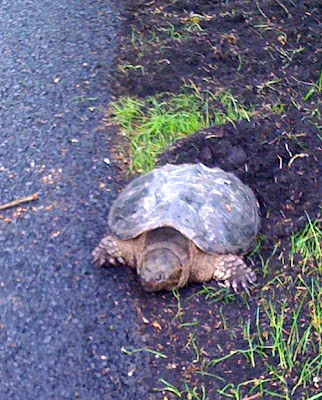 That evening on the local news was a story of another turtle that was captured in a backyard several miles away. They are snapping turtles that have invaded the wetlands and creek. They are not native to the area and are thought to have been pets, originally, that were released into the creek and have bred there for years. This is the season when they come onto land to dig holes and lay eggs. They are quite destructive, eating the native fish, frogs, even baby ducks and can take a finger off if you are dumb enough to offer it to one. We found this one pretty interesting and were happy to have encountered it until we learned later what pests they are. If we see another we are advised to call the Parks department or Fish and Wildlife, who will come and take it away. Wish I had known. Now I am on the lookout when we walk.