One show down, now onward to the Open Studios

Now that the Celebrate the Gifts show is out of the way, I am working at getting ready for the Open Studios in two weeks.

I still had that dye pot with maybe a bit of life left in it. Before cleaning up the dyeworks I decided it might go one more round. It had gone from turquoise to green and was now pretty depleted so I tossed in a bit of brown and a touch of black for its last hurrah. This is the point at which I can use it to add some subtle changes to some of my fabrics. I threw in some blue fabrics to see if I could flatten them some—gray them out with a little green cast. I like what I got. I know I will be able to use these nicely. I especially like the very light one at the bottom, which started out as a very typical pale blue and white check. I folded it so you can see that there is a noticeable difference between the back and the front, so it will do double duty. I really like these smoky colors, which mix so well with the more intense hues.

The weekend show was good. It is only the third year the church has done this show and attendance could have been better. It was a slow go and most of the sales were small pieces priced under $100—all of my sales were in that category, but that isn't unexpected. What I really enjoyed was visiting with the other artists. I met some really talented and lovely people. The collage artist who was set up right behind me was especially nice and we kept admiring each other's work. Near the end of the show she proposed a swap and I was happy to trade one of my small pieces for one of hers. 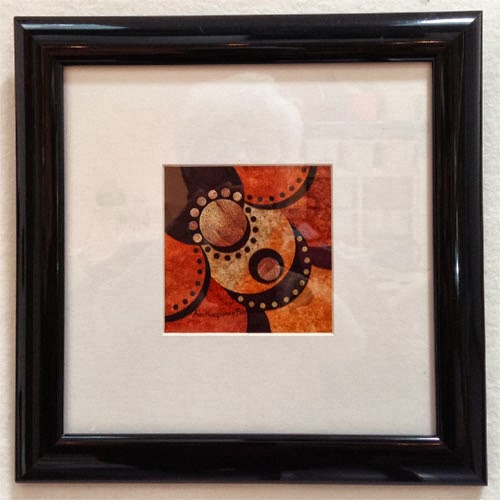 Nice, isn't it? She is a Finnish woman by the name of Airi Huoponen Foote. She has a web site here.

As much work as a show like this is, it is something I like to do occasionally. It really is good to talk to people—both viewers/shoppers and other artists. I am always a little surprised (pleasantly) at how many men are very interested in the technical aspects and want to know about sewing machines and what they will and won't do—"I don't suppose you have some kind of machine that you program and then just put fabric into it and it will do the rest...?  Yeah, I didn't think so." A lot of people say, "you must have a lot of patience..." or they say "you must have very good eyesight!" I'm never sure whether to confess that I have neither or just smile appreciatively. One woman picked up one of my small pieces and put her nose right up to it and declared, "I would be in the loony bin!" I suggested that maybe it's what keeps me out of the loony bin.

At the very end, as we were packing up I finally decided to buy the one piece of art I had been coveting and got it before it got packed up and carried away. It is a piece for the garden and I can't wait to see how it looks out there. Of course I will post a photo.
Posted by Terry Grant at 11:39 PM