I don't think I ever mentioned the reason I was traveling last week. Ray is working in the US Virgin Islands for two weeks out of each month. He has been doing this since October and will continue to do so through April. (He does IT consulting for colleges and universities—he is working for the University of the Virgin Islands right now) So poor Terry is home alone in Portland two weeks a month and decided that I ought to at least get a trip out of this deal and what better time than February to escape Portland rain. So first, several days in Puerto Rico, then to St. Thomas for a couple of days. 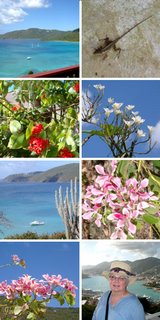 Ray worked in the V.I. for several months about 14 years ago, so I had been there. It hasn't changed a lot since then. There are probably a few more fancy resorts, the cruise ships in the harbor are even more enormous than ever and the abandoned cars are gone from along the roadsides. A friend was telling me that St. Thomas got some kind of grant (EPA maybe?) to remove thousands of abandoned cars from the island and there are now stiff penalties for abandoning cars. As you might imagine, disposal of a nonfunctional automobile is a problem on a small island. I have to admit there was something rather charming about seeing a rusted out VW van engulfed in flowering vines with chickens living in it. Above is a "photoquilt" of some images of St. Thomas.

To bring this all back to the subject of fabric art, below is the quilt I made for Ray after our first visit to St. Thomas in '92. It was one of my first totally "art" quilts and is titled "Red Roofs of Charlotte Amalie" 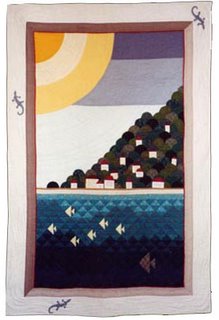 I got home alone to Portland late last night. The shuttle driver, that took me to my car, said snow was expected, but today it is sunny and clear. The cat was happy to see me. It is quiet/lonesome in the house. Ray is back at work in the V.I.
Posted by Terry Grant at 11:27 AM