I belong to a fiber art group called High Fiber Diet and every so often we set aside a Saturday to get together and dye stuff. Today we met at the Mill End Store here in Portland, mixed up a bunch of dye and tried out several techniques. Karen Miller showed us some new ideas for silk screening with thickened dyes. We used a blank screen and tried several different techniques, using cut stencils, torn paper and finally my favorite, drawing directly on the screen, letting the dye dry, then screening another color through the screen. 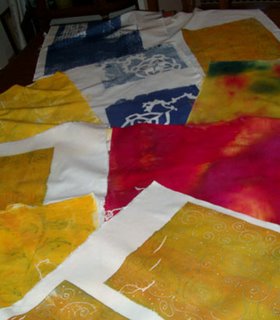 Here are the pieces I did today. Nothing too earth shattering, but all probably usable for something and definitely some new ideas. 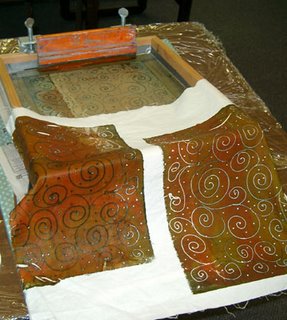 Here's my favorite. I used thickened dark blue dye in a little bottle with a fine tip to draw a swirly design all over the screen. I let the dye dry. Then I used a combination of gold-y and green-y mustard dyes (thickened) to print. In the first print, the dried dye functioned mainly as a resist, though some of the dark blue released. The second print released the blue dye and the design printed mostly dark blue. I did a third print, which printed a much faded and ghostlier blue design. 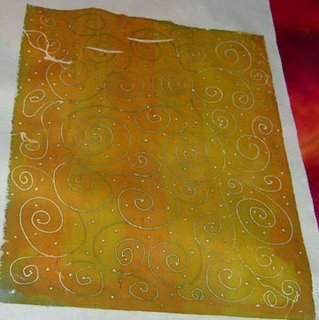 Here is the first print after it was washed and ironed. The white streaks were wrinkles in the fabric—oops. 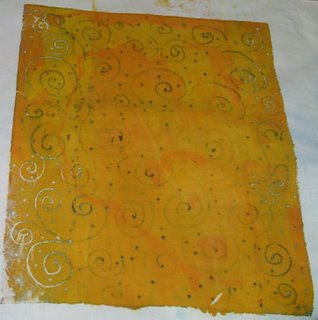 Here is the second print. I am exhausted, but I'm pretty pleased with some of the things I did today.
Posted by Terry Grant at 6:27 PM