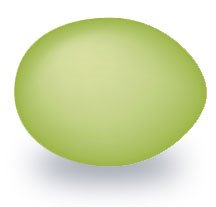 Easter is not being celebrated in a big way at my house. In fact it really isn't being celebrated at all, since I am the only one home and I haven't yet reached the stage where I enjoy hiding and finding my own Easter eggs.

When my kids were young, the Easter egg thing was a big deal. We would dye and decorate a couple dozen eggs the evening before Easter, which was a messy, but creative and fun activity. Andy was into mixing dye colors and dipping and redipping eggs until they were striped in various mud colors. Emily liked pure, unblemished color, then happily applied the rub-ons or stickers that came with the dye kits.

The next morning the eggs and Easter baskets, filled with cellophane grass and foil-covered chocolate eggs and jelly beans, would be hidden all over the backyard for the kids, in pajamas and robes, to find. I had counted the eggs so I knew exactly how many needed to be found. Throughout the day the eggs were hidden and rehidden—inside the house and outside. Eggs were eaten or stepped on so the number dwindled and the actual count became less precise.

One summer, my cousin and wife and their son, Eric, came to spend the 4th of July with us. Eric, who was probably about 8 that year, was between my kids in age, so the three of them were pretty good companions. It was a hot July day—up in 100 degree range. We had taken the kids to the parade, eaten lunch in the park and were tired and very hot, so we came home, closed all the windows and cranked up the air conditioning. We were sprawled all over the livingroom, fanning ourselves, sipping iced tea and waiting for the AC to do its job. Eric, who was stretched out in the middle of the floor, rolled over lazily and said, in a matter-of-fact voice, "I see an Easter egg", then plucked a dyed egg from an arrangement of dried flowers sitting on the hearth. It had been visible only from his vantage point flat on the floor. It was uncracked and the color was unfaded. It did rattle when you shook it, however. It had obviously been there at least since Easter, but maybe it had been there since the previous Easter, or the previous . . .

Eric is past 30 now, a handsome young man, a husband and a father. We don't see him very often anymore, but the last time I did, he said, as he always does, "remember the time I found an Easter egg on the 4th of July, at your house?" Then we all laugh. It is still a funny memory.

Have a Happy Easter—and try to keep track of your eggs.