Art in the Pearl 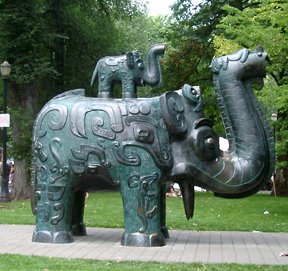 For the past 10 years there has been an art festival called "Art in the Pearl" over the Labor Day Weekend in Portland's Pearl District. We usually try to go and have even bought art there at least once. It is held in the Portland North Park Blocks, which is a beautiful, tree filled series of grassy blocks, lined with nice old buildings.

This funky elephant sculpture is near the children's playground area as you enter the blocks. When we first came to Portland, the North Park blocks were full of homeless people, sleeping on park benches and under the trees. As the Pearl District has become more gentrified you see fewer of them occupying the area. On Saturday amid the c 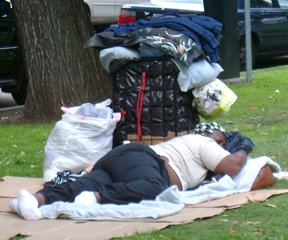 arnival atmosphere of the art festival, you could still see a few of the transient residents lurking about. This woman seemed to find it no problem to sleep despite the crowds and the bands performing nearby. There was something quite sad about people streaming past her as if she wasn't even there.

Perhaps I am jaded. Perhaps I just wasn't in the right mood, but I found the art mostly uninspiring. So many booths of oh-so-whimsical prints of cats jumping over moons and coyotes howling. Several booths selling wee purses, made from upholstery tapestries with vintage button closures—novel several years ago. And all those scratchy-looking handwoven shawls in earthy colors and too many wispy scarves. Too many salmon and too many booths featuring one idea rendered endlessly in large, small, horizontal, vertical variations. 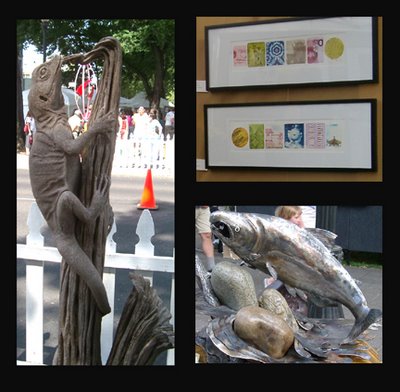