Lots of questions and posts on QuiltArt about using Adobe Illustrator or other illustration software for quilt design, so I thought I would share one way I use Illustrator. 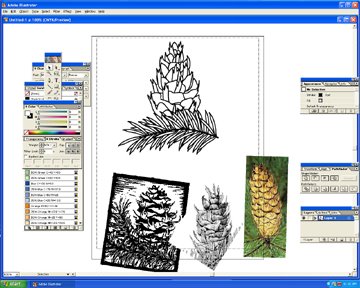 This is a screenshot of my open Illustrator file as I was working on it. I wanted to create a drawing of a Douglas Fir cone and branch (I'll tell you why later). I wanted to get the structure and the details right, so I found some images of Doug Fir cones on the internet and saved the pictures. Then I placed them on my Illustrator artboard for reference. At this point I should tell you that if one wanted, they could put one of those photos on a background layer, create another layer to draw on and simply trace the photo. I did not want to reproduce any of these images, just wanted to be able to look at them as I worked. So the three images at the bottom are from internet sites, for reference. The image at the top is 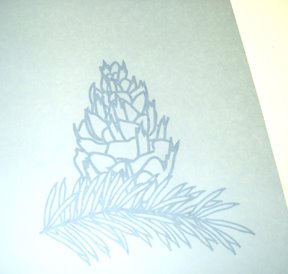 my drawing. When my drawing was finished I deleted the reference images.
I enlarged my drawing to the size I wanted it. (That's a great thing about Illustrator—it is a vector image that can be enlarged to whatever size you want with no loss of quality) I printed my drawing, then laid it face down on my lightbox and used it to trace parts of the cone onto the back of the fabric I had chosen for 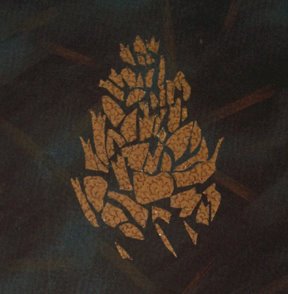 the cone. Then I could use my method for fusing to start creating the cone on a dark brown background fabric.

What this piece is for is still kind of a secret, but in a few days I'll show you the completed project.
Posted by Terry Grant at 9:10 AM