Last Saturday June and I went south to Eugene, Oregon for our first get together with a new critique group of Oregon fiber artists. It was really a wonderful day and we met some new people as well as seeing artists we knew from other times and places. The guest critic was Tina Rinaldi, who is the Program Manager for the University of Oregon's Arts & Administration Program, where she also teaches as adjunct faculty. 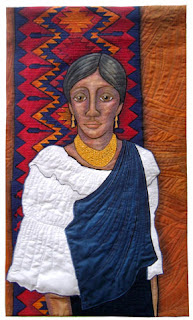 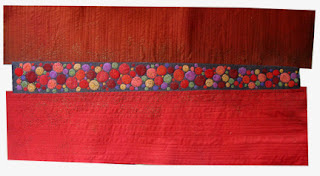 Each of us was invited to bring two pieces and be prepared to talk about an "issue" that we were dealing with. I brought the these two pieces, The Weaver, and the new circle motif piece that I have been struggling with. Tina did not "critique" our work in the usual sense, and was very kind and positive in all her comments, but I found that she was remarkably insightful and had very interesting things to say. The issue I was presenting was my frustration in trying to move away from representational work into something abstract and my frustration that the piece I had hoped to be very graphic and flat simply fell flat and I was, by now grasping at straws, having stenciled little dots and even trying some beads on parts of it. 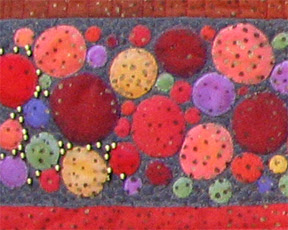 You can see the beads on the left portion of this detail. Considering my lack of enthusiasm for beaded quilts, this was truly a measure of my desperation! Tina did not say to get rid of the beads, but she did say she hoped I wouldn't "go nuts with the beads." Instead of really offering suggestions, she talked about the concepts of "flatness" and depth of field and pointed out the similarities between my two pieces as opposed to the differences. I agreed that I had made a very conscious decision with the weaver to keep the design fairly flat, with no real sense of depth. I left with a renewed interest in finishing what I was, by now, thinking of as the "layers" piece. 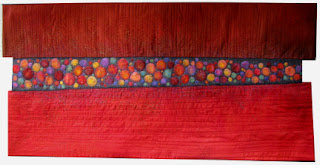 On Sunday I finished "Hidden layer." I removed the beads and worked on making the color more complex. The differences may not be very apparent from the photos, but to me it was the solution I needed. In my critique session the idea of working on the color did not come up, but new thoughts and ways of looking at the piece led me in that direction ultimately. I am more pleased with this piece than I thought I would ever be. Describing it to June on the way to Eugene in the car I called it "a piece of crap" which was how I was feeling about it! 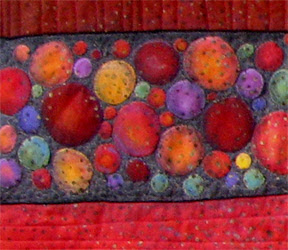 You can probably see the color changes in this detail better than in the full quilt. This is the section where the beads were. I also added the tiny black lines at the edges of the hidden layer, which make a big difference in my opinion.

You can read more about the Critique session on June's blog.

P.S. I am still waiting for my new monitor. It was to be sent to replace the defective one that was still under warranty. I am not impressed by Viewsonic's customer service. Tracking shows that it arrived in Portland on Saturday, so it should show up here today. Meanwhile I am still not sure what these photos look like on your monitor. They look pretty bad on mine!
P.S. again: The new monitor came and I saw just how bad the photos really were, so I have replaced them. Now they look like they are supposed to.
Posted by Terry Grant at 12:59 PM