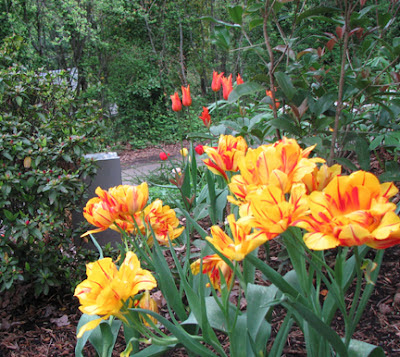 Our tulips have been fabulous this year, thanks to Ray's great gardening efforts. This clump of yellow and red beauties is new, as are those spiky little orange numbers. These are on the slope out front. I really love driving up our little lane and seeing the tulips all over the bank in the front. Cayo, my son-in-law, calls them "tulipans", the Spanish name. Years ago we bought a house from a Dutch woman, whose father was a bulb exporter. To our surprise and delight, the spring after we moved in, tulips sprang up all over the yard and garden—green tulips, purple tulips, double frilled tulips, black tulips. You can't have too many tulipans. Maybe that is my Dutch heritage speaking. My mother's maiden name was Van Valkinburg. 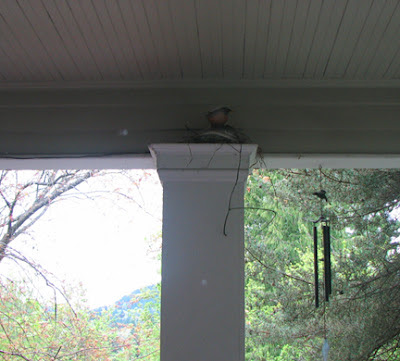 A robin has built a nest just outside our front door on one of the porch pillars. We have had nests there before, but usually they are abandoned before they get used. Our old decrepit cat, Gracie, sleeps in a chair on the porch for much of the day and I think, harmless as she is, she usually scares the birds away. This year, however, a feisty robin built a nest and she is ignoring Gracie. 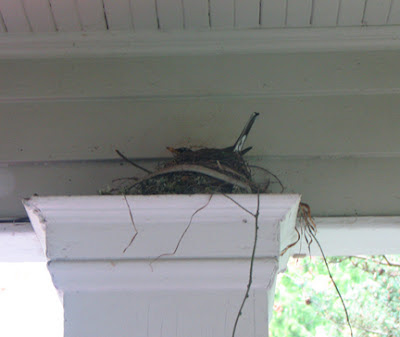 I came home today to find Ms. Robin sitting on the nest. I ran to get my camera and took pictures through the front door window. When she became aware of me she popped up to guard her nest, but didn't fly away. I am only guessing that there are eggs in the nest. Isn't she a vigilant protectress? That grey cord is an electrical cord that runs up through the pillar. She just moved it aside for her nest building. 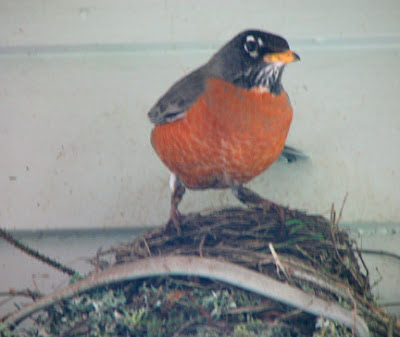 We're going to try to use the back door as much as possible in the coming weeks, so we won't disturb her. I pointed her out to Emily this afternoon when she came by and she said, "won't it be fun when Sofia is old enough that we can show her the birds?" Indeed.

Emily, by the way, is feeling stronger and better day by day. She drove for the first time today, since her surgery. She saw her Dr. today who told her she is healing well.

"Hope I die before I get old"

I love this. (with thanks to Sandy for the link)