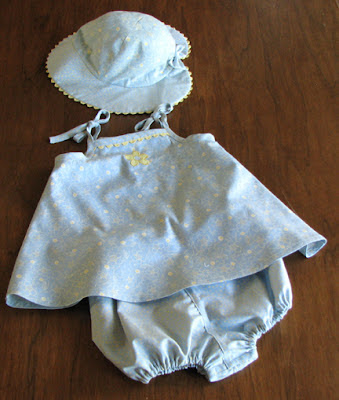 I made this little summery outfit for Sofia this week. (See, I have actually been doing some sewing) I was partially inspired by Jane Ann. I enjoy her blog so much and the other day I clicked on a little icon in her sidebar that took me to this. Wow. Her grandchildren are quite lucky and very well-dressed. I am not up to the gorgeous heirloom details she so loves, but it is a labor of love to sew for one's grandchild, so I went shopping for pattern and fabric awhile back. The first thing I discovered is the dearth of good patterns for babies. The one I bought is a McCall's, but the other companies (Simplicity, Butterick, etc.) seemed to have this exact same pattern and not much else. The second problem was sizing. This is a S-M-L sized pattern. The sizes are denoted by a weight-range. I made the small, which is for babies weighing between 13 and 15 pounds. Sofia weighed more than 11 pounds a month ago, so I guessed small would do. It is huge. The hat is super huge. She may grown into it before the end of summer—hard to tell. It may fit her next summer. Sofia and the sundress may pass each other going opposite directions sometime mid-January. I like the ready-to-wear sizing better, which is age in months. Imperfect but closer somehow than small, medium or large. Still, Sofia has a couple of new dresses from the Hanna Anderson outlet that are size 60. I don't get that at all, but they are sure cute dresses. (the purple and teal striped dress in the previous post is one of them. The helmet hat is theirs too)

Once upon a time I sewed lots of baby and kid clothes. The summer before my son was born, Ray and I spent a month and a half in Moscow, Idaho where he was enrolled in a National Science Foundation summer program. We lived in the housemother's apartment in Ray's fraternity house. I took my sewing machine along and set up my sewing space in one of the empty dorm rooms and made baby clothes all summer. I took breaks and watched the Watergate hearings on TV in the lounge, until the few guys living in the house for summer school got home from class. Then they changed the channel and we watched Star Trek reruns. I had spent the previous school year teaching English and Art to 8th graders, a kind of Hell I wanted to put out of my mind, and this mindless summer of sewing and TV was exactly what was needed. I came home with a nice stack of flannel nightgowns and sleepers and diapers. Yes, I sewed my own fitted diapers. Over the years I made a lot of clothes for my kids.

So, this is my first effort for Sofia. I am clearly out of practice.

P.S. Christine asked about the pronunciation of Sofia's name. It is just like Sophia Loren. Sofia=Sophia. Same name. Sofia is the Spanish spelling—probably the Italian as well. Wikipedia says that Sophia Loren was born with the name Sofia Villani Scicolone.
Posted by Terry Grant at 9:43 AM