A few people seemed surprised to learn that I was in a college sorority when I mentioned it in a post a couple weeks ago. I worked, for a year, for the sorority after I graduated. It was a great time in my life, but I rarely mention it these days. I've found that people have a lot of crazy ideas about sororities. 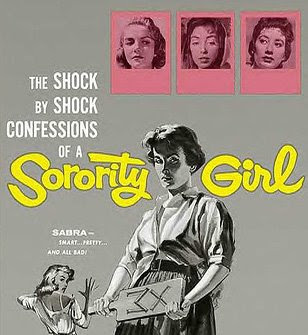 "smart, pretty and all bad!" 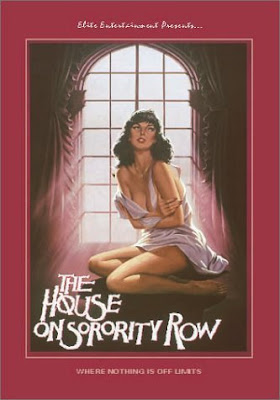 "where nothing is off limits"

I have to laugh at those images, when I think of the girls who were in my sorority, Alpha Omicron Pi. We were a pretty simple bunch of girls, not rich, not glamorous and far from the seductress of the book cover above. The Greek system was small on our campus—only three sororities that were categorized, not always accurately, as the "beauty queens", the "fun girls" and the "smart girls." We were the smart girls.

Sororities were going out of favor in the '60s when I was in school, but for some of us they represented a bit of old-fashioned structure and support in a chaotic time. We were folded into a warm and supportive group and nurtured by the older members. We were encouraged in our studies and tutored in the social landscape of the college world. The traditions of our sisterhood required us to promise loyaltyand respect and to treat each other as we would wish to be treated. We tried and mostly succeeded. We had parties and raised money for charity and competed with other groups in singing competitions and skits and float building, but the things I remember most were late night talks and someone who cheered you on when you needed it and cried with you when your heart was broken and saved you a seat in the dining hall and times we laughed so hard our stomachs hurt. I remember kindness and acceptance. Like I said, a good time in my life. And then we graduated and went on to our real lives in the real world and some of us have never spoken again, but some remained, as we promised we would so long ago, lifelong friends. 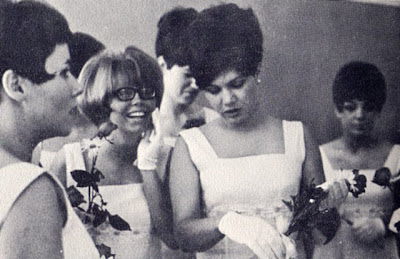 Ready to go onstage for "Songfest" in our matching
white dresses and gloves. 1967
Yep, that's me.

So, now I've come out of the closet—any more sorority girls out there?

Added note: I figured the comments would bring out a few sorority horror stories. I do know that different groups have different personalities and nastiness can show up anywhere. Just not my experience. For Helen and anyone else not familiar with Greek organizations, the Wikipedia entry seems pretty right on to me. Most started in the 19th century when Greek was still taught and most Greek letter names are the initials of a Greek phrase or quote. I could tell you what AOPi stands for, but then I'd have to kill you. ;-) (Actually, to tell the truth, I don't remember.)