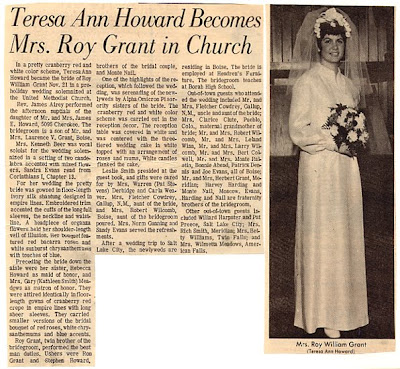 Remember when weddings were covered as stories in the newspaper? Printed in the Society section of the paper with a full-length photo of the bride. Maybe this is still done in some places, but I think for the most part this custom has gone by the wayside.

There was a small problem with this story about my wedding. Throughout the story, including in the headline, the groom was named as Roy Grant. I married Ray Grant. And there really is a Roy Grant—Ray's twin brother. It was funny and embarrassing and maybe a little bit horrifying to see that in print—not that there is a single thing wrong with Roy. He's a wonderful, lovely man, but he's my brother-in-law, not my husband. Oddly enough the story correctly identifies Roy Grant as the best man and twin brother of the groom.

My mother insisted that the Idaho State Journal reprint the story with Ray's name and they did. That's the version that is glued in my wedding album, but I found that my Mom had kept this one when I went through her things after she died.

Sometime around that same time there was another wedding story in the paper with a photo of a bride in a very large-skirted wedding gown. Printed directly on the opposite side of the page was a photo of a college wrestler ready for a bout. The hairy legs, tight little trunks, and laceup boots of the wrestler were clearly visible through the white skirt of the bride, even more so if you held the paper up to the light. The alignment was perfect and totally hilarious. That would have been worse than getting the groom's name wrong. I think people all over Pocatello had that one posted on their refrigerators for a long time—I know we did, until it disintegrated. I wish I had kept it.

We had a good anniversary—we took the MAX to downtown Portland and saw a movie and went to dinner. Then we came home and had a little champagne. Cheers! Here's to 39 more.

P.S. I can't not mention that headline, wrong name or right. "Teresa Ann Howard Becomes Mrs. Roy/Ray Grant"—?? This was 1970—things like this were becoming touchy subjects. I have never liked, nor have I ever used the name Mrs. Ray Grant. When I got married I became Teresa (or Terry) Howard Grant. (no Mrs., Ms., or Miss) And that is who I am.