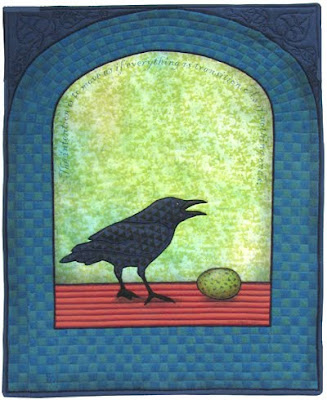 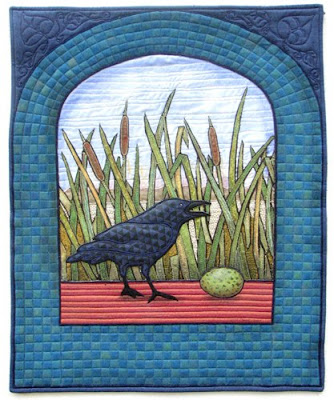 Here is the final chapter in the reworking of the Crow saga. A whole new background. Even before I tried the crow over the Mt. Hood and other quilts, it seemed to me that what the old background lacked was a sense of space and depth. I have been walking along the pond and noticing the tall grass and cattails and the crows fluttering around, so it seemed that a wetland scene beyond the arched opening would be fitting for the background. It really does seem to me that this new background also pulls you into the scene and makes that surrounding blue checkerboard border seem not so heavy and overpowering. It feels like a vast improvement to me. I am now looking at some of my other older pieces and wondering how they might be improved.
:: :: :: :: :: :: :: :: :: :: :: :: :: :: ::
This morning on our walk we saw a large evergreen tree that had fallen over the fence from someone's yard. The trunk had splintered. Scary sight, but thankfully it had not fallen on the house, but rather over the back fence onto the park land. The top of the tree which was laying near the path was filled with beautiful, long, narrow cones. I can never resist beautiful evergreen cones. (Just ask Ray—he's rolling his eyes as he reads this) So I brought a few home with me. They were covered with sticky pitch though and I was pretty sure I had ruined my gloves. Years ago someone told me how to take care of pitch on big cones, so I brought them home and put them on a newspaper covered cookie sheet and stuck it in the oven at about 300 degrees for about 10 minutes. The pitch melts and drips onto the newspaper. I took them out of the oven and transferred them to wax paper to cool. 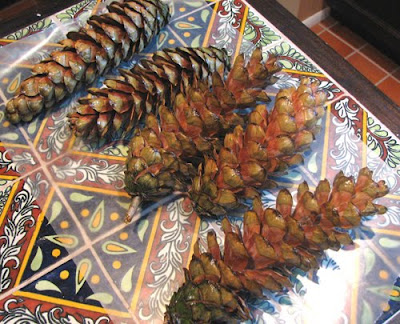 The neat part of this treatment is that when the pitch melts it turns clear and shiny and hardens, so the cones look almost like they have been varnished. 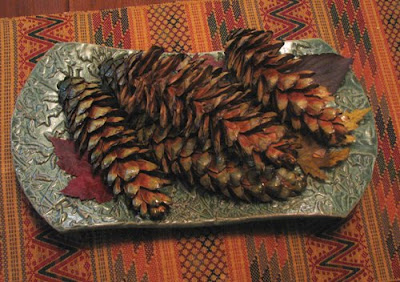 Aren't they pretty? And my house smells like a pine forest.

And, by the way, my gloves— I have some spray stuff called De-solv-it that took the pitch off my hands, so I put the gloves on, sprayed all the pitch with the spray stuff, then washed with dishwashing detergent. I think they will survive.