We got home from Cleveland late last night and I am pretty beat today. It was a good trip and I have lots of pictures to share.The first day was spent taping my 3 segments for the Quilting Arts TV show. 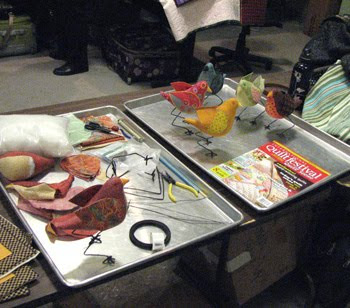 I arrived at the Beachwood Studios at 8 am on Friday morning. This was the last day of taping for the upcoming season. I think there were 8 of us taping that day, so it was a lot of waiting for my turn and visiting with people. There were several people there from Quilting Arts as well as the Beachwood people who were very helpful and got us all set up with trays for our demo materials. Here are the trays with all the stuff for my stuffed bird segment.
Met lots of interesting and talented people. One of my favorites was Kathy Mack of Pink Chalk Studio on Bainbridge Island. I enjoyed talking with her and we found we have friends in common. She had a totebag pattern in the same issue of the special Quilt Scene magazine that my birds were in, and she demoed it for her segment. 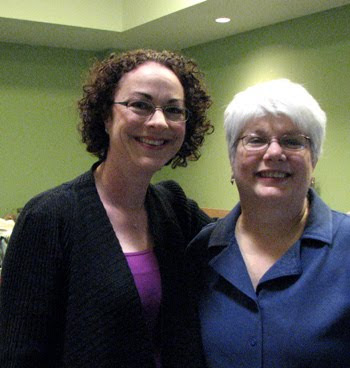 My first segment was about the edge finish technique that I wrote an article about.
My second segment was offering suggestions for ways to finish work that people sent in that they were stuck on.
My third was how to put together the birds.
Just before my first segment, the guest was Sophie Rubin, a 7-year-old who makes quilts. She is Luanna Rubin's daughter and is adorable and was so cute and funny. What an act to follow! 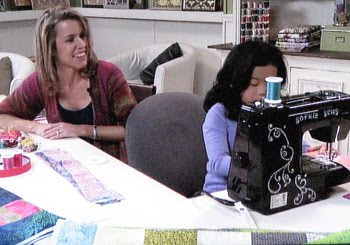 We broke for lunch, which was provided in the pleasant, sunny upstairs room at the studios, then it was on into late in the afternoon. 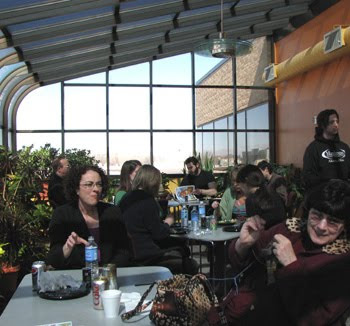 My bird segment was the last of the day—which was the last of the weeklong marathon for the crew.
Pokey Bolton, the host of the show and editor of Quilting Arts magazine is terrific and really goes out of her way to make you feel comfortable and at ease. I was nervous. I was stiff and felt, at times, like I was grinning like an idiot, trying to look pleasant and engaged. I haven't seen the segments so I won't know until I do, but I don't think I was awful. This was pretty far out of my comfort zone. I am an introvert and not accustomed to "performing" but I have to admit it was fun. And the people were great. I am flattered that I was asked to do it. 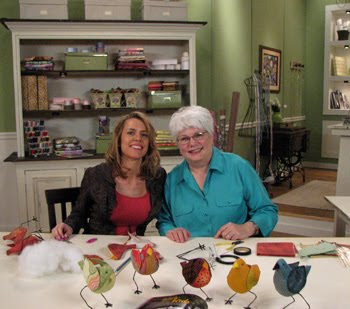 At the end of the day, despite the fact that most of the day was spent waiting and watching other people's segments tape, I was exhausted. Ray and I went out to explore a bit of Cleveland. We went to the Shaker Square shopping area and found a wonderful Brazilian restaurant called Sergio's Sarava.  I was so tired I set my glass of wine down on the uneven edge where two tables were pushed together and spilled the entire glass. I never do that. Mental fatigue and jet lag. That's my story.
The shows will be broadcast later this year on public television stations around the country. Unfortunately it is not seen in the Portland area. I will get a copy.

More pictures can be seen on Pokey's Quilting Arts Blog.
Posted by Terry Grant at 12:14 AM