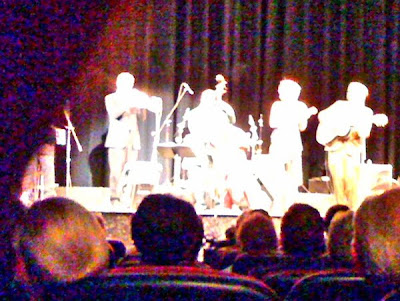 I never thought phone cameras were worth much, but for some reason I am enjoying the camera function of my iPhone. I downloaded an app that gives it a zoom function. Pulls the scene in a little closer, but since it is a low resolution image to begin with, zooming it just produces pixelation. The first picture is one I took at a performance we went to with some friends on Saturday night. It was billed as "The Hepcats Ball" and featured three bands that play jazz from the '20s, '30s and '40s. The venue was quite wonderful—the Venetian Theater in Hillsboro is one of those great old theme movie theaters that has been restored with a restaurant and grand theater. We had dinner (it was good) and really enjoyed the show. My iPhone, zoomed photo is technically awful, bad light and all, but I also think it is kind of interesting. The bright light on the band renders them in near silhouette, while the curtain and heads of the audience members dissolve into Seurat-like dots of color. 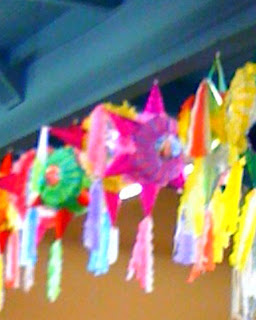 Sunday I went down to the Mexican grocery in Beaverton to get fresh tortillas. I ran into my daughter and granddaughter there shopping for a pinata for Sofia's birthday party. The grocery is a very interesting place. It really looks and feels like stores I have been in in Mexico, right down to the grody linoleum floors, produce bins full of cactus paddles and pyramids of neon-colored soda pop. You can order fresh tortillas to be made while you are shopping for other things, then pick them up warm and wrapped in foil on your way out. And, of course, overhead are hundreds of pinatas. So I pulled out the phone and zoomed in on a colorful bunch.

My tortillas were for the dinner I planned for the family following Sofia's birthday party. I cooked a pork shoulder until it fell apart for tacos, using the fresh tortillas, some amazing salsa from the Mexican grocery, a sprinkle of cotija cheese, my homemade guacamole, cilantro, tomatoes, etc. etc. The tacos were divine. As Ray said, about as far from fried ground beef in a hard taco shell as you could get. We were all so tired from an afternoon of celebrating Sofia's birthday with 5 three-year-olds that we may not have enjoyed the dinner as much as we might have. Luckily I had so much leftover that we are going to do it again tonight.

Today is Sofia's actual birthday. Three years of joy and love. I never imagined having a grandchild would be like this. What a gift!
Posted by Terry Grant at 10:23 AM