Yesterday I drove down to Eugene, Oregon (about a 2 hour drive) for critique day. I belong to a group of fiber artists, from all over Oregon that meet twice a year. We bring 1 or 2 of our recent works to show and we have an outside critic who critiques them. Our outside critics are people from the art community—artists, teachers, curators—who are NOT fiber artists. It gives us a good perspective on the artistic integrity of our work, aside from sewing proficiency and fabric choices! It is always interesting—sometimes helpful, sometimes not.

I just discovered that my camera was set on the wrong settings, so most of the pictures I took are terrible. Here is our critique-er, Beverly Soasey, a mixed-media artist and curator of the Jacobs Gallery in Eugene. 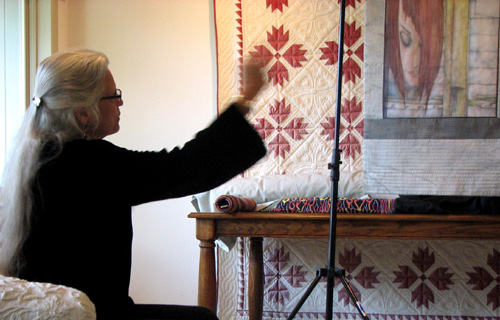 She is talking about Mary Goodson's piece with the face, not the antique bear paw quilt hanging on the wall behind it. I liked her approach. She said since much of her work is jurying artwork for shows, she would talk about our work as if she were considering it for the gallery or a special show. She talked about what a juror might see in a digital image and how that might differ from the actual work. She talked about the importance, when submitting digital images, of including a compelling description of the process used, which she felt was much more important than describing the meaning or emotional content of the piece—that will differ according to who is viewing it, but technique and process are interesting to viewers when evaluating a work and putting together a cohesive, yet diverse collection of work to show.

Like many of our former critics, she was pleasantly (I think) surprised by the variety of work and how many different styles and approaches our group had to show. Also, like so many of our past critics, she got a little hung up on technique and how the work was made, but I think that is pretty typical of artists looking at work done in an unfamiliar medium. 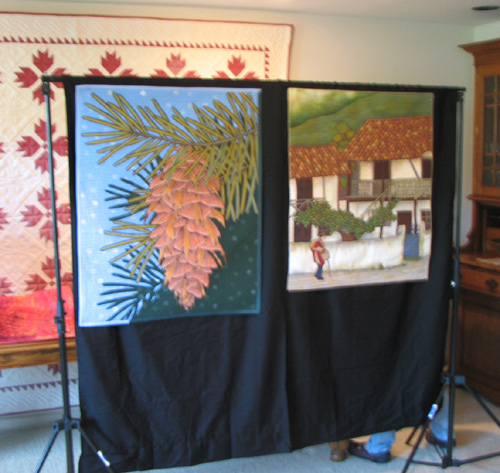 These were the two pieces I took for critique. Her initial reaction was to "all those little tiny pieces!" But then she began to actually analyze the work. I was pleased that she pointed out and felt it was effective, the simplified, stylized background in the Douglas Fir cone piece. She said the piece had the feeling and appeal of a drawing, which also pleased me and echo exactly my intent. One of the earlier artists had made the comment during her own critique that she always has a hard time knowing when to quit when she is working on a piece. That idea came up again in another critique and then she praised my pieces as having "clarity" and said that I obviously do know when to quit! So I came away with nothing that I can use to improve my work, but it always feels good to get positive reinforcement. And hearing the remarks about other work is sometimes as edifying as hearing the remarks about one's own. It was a smaller group than usual, which meant we ended fairly early. Sometimes these things go on too long and I come away mentally exhausted. Yesterday I just had some good thoughts to ponder on my drive home. It was a beautiful day and I enjoyed the drive. Since I was the only member from Portland that made the trip, I was alone, but sang along with the radio and offended no one.
Posted by Terry Grant at 3:07 PM