Really, this quilt I am making for The Space Between invitational is not that big. 36" x 48"  But it is bigger than I usually work and that always takes a mental adjustment. I am really out of the habit of working large. So I have been struggling with it. I had ideas that didn't really work, so I have been changing things as I went along. I am nearly finished, and as is so often the case, I really don't know if it works or not. I have been looking at it much too much to have any objectivity left. That, I find, is another disadvantage to working large. I really get sick of the darn thing before it is finished.

Yesterday I was pushing through. I was finishing up the quilting, which would have left only the binding or other finishing to do. I could have been finished by the end of the day. But there was an area that has been bothering me nearly since the beginning. The baby's face. The two faces were the first things I made. I was trying a way of using small prints in varying values to create the faces, which was really tricky to begin with. I was not going for exact realism, but I wanted a sense of reality about them—not cartoon-ish or overly sweet. I knew the baby would be the hardest one. Easy to make a baby look like a doll or an alien or a little old man. Hard to make it look like a real baby. Here was the face, as I originally made it. 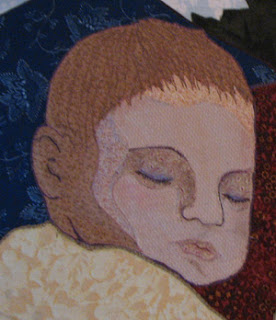 I liked the expression of the sleeping baby, but there were things I didn't like. First, the main pink fabric was thin and the dark fabric behind it showed through giving the baby a slightly dusky complexion. I had used a piece of more orange fabric along the hairline, which just didn't work at all and I felt the dark fabric I used for the hair and shadowed part of the face was too dark. I ended up doing really too much stitching on that face and added some painting. The combination made the face look dirty in some areas. I went back and forth and back and forth with this face. Up close I could really see all the flaws. When I stepped back a bit it looked OK. I decided to go with it and sewed it all down, but it kept nagging at me. I think the final problem was realizing that the baby's face was darker and less defined than the mother's. They did not "match." Finally yesterday afternoon I decided it would always bother me and I started over with the face. Here is the new face: 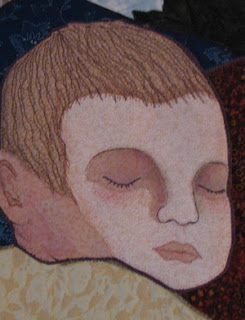 It is not perfect. In many ways I still like the first better. The pose seems more relaxed and natural, but I like the coloring better in the second and it is my final solution to the baby's face. I think in the context of the rest of the piece it works better.

I'm sure you can tell I have very mixed feelings about this piece. I felt the same way a year ago when I finished the piece for "Beneath the Surface" which was the same invitational. My piece "What's left Behind" was accepted for that show and I like it much better now than I did when I finished it! I just need to finish this one and not look at it for awhile.
Posted by Terry Grant at 10:54 AM