The objects #24 Other peoples' rings

I don't own what you'd call "fine jewelry" which is fine with me. I prefer silver over gold and I like quirky, interesting jewelry. It would make me nervous to have something really valuable to be responsible for, even if I could afford it! My own wedding ring will no longer fit on my finger, so it is in my jewelry box and I am trying to decide what to do about that. But I have a small, but interesting, collection of "other peoples' rings" that I enjoy wearing. Here are four of them. 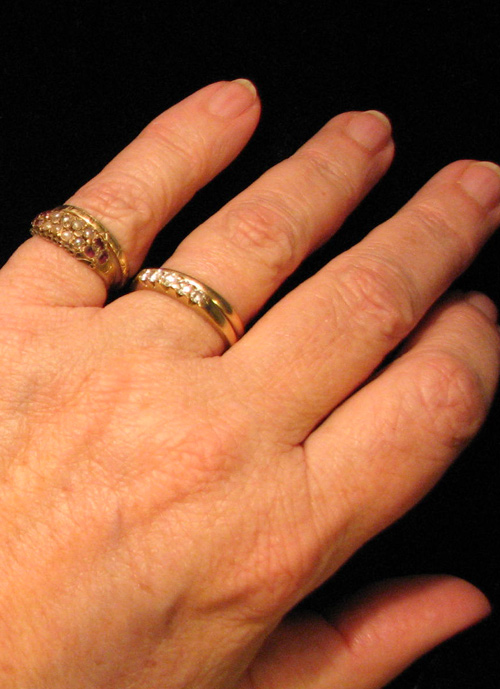 Starting on the left, the small gold band with the engraved design was among my mother-in-law's possessions. It was not the wedding band that she wore. Perhaps it was from her first marriage. Her first husband was killed in France in WWII. It is a very pretty little ring, quite old-fashioned. Perhaps it was her mother's ring. I like it because it was hers. She was a dear person.

The ring with all the little pearls and garnets (there are some teeny, tiny little diamonds in there too) was found in a parking lot when I was in college. It had been run over, possibly a few times and was pretty mishapen and missing a couple of pearls. It really didn't look like much. I stuck it in my pocket and didn't think much about it. Weeks later I found it in my pocket and when I examined it I realized it was probably an antique and precious to someone. I put a "found" ad in the newspaper, saying where I had found it, but no one ever responded. I took it to a jeweler who replaced the missing pearls and straightened it all out. He confirmed that it is quite old. The photo doesn't do it justice. It is very intricate and, I think, quite lovely. Since I have had it for more than 40 years I suppose it is truly mine, but I still think of it as someone else's ring.

On our 25th anniversary Ray and I went up to Vancouver, B.C. for a long weekend. We had never been there and were enchanted with the misty, watery landscape. One morning we were walking in Stanley Park, among the marvelous totem poles. It had rained overnight and everything was sparkling and clean and green. A beautiful morning. I looked down just in time to avoid stepping into a puddle on the pathway and there in the puddle was the plain gold band you see on my ring finger. I looked around. No one was in sight. I picked it up and slipped onto my finger where it fit perfectly. As we met people on the paths that morning I asked if anyone had lost a ring. No one had. I wondered if it had been flung into the mud in anger, but decided it was more likely that someone simply pulled it off removing a glove and didn't realize it was gone. I have worn it ever since and still feel a little guilty that I didn't do more to find its owner.

The last is a plain gold band set with five small diamonds. It was a gift to my mother from my father on their 50th anniversary. A diamond for every 10 years of marriage. My mother loved it and the romantic gesture by my Dad. I have worn it since she died. It makes me think of both of them.
Posted by Terry Grant at 11:36 PM