I am continuing to report on my progress drawing and painting using the iPad. Last week at our STASH meeting I did a little demo and discussion because Gale was interested in using her iPad for drawing and planning projects. She was asking about whether one could load a photo into a drawing program and trace it. This is quite possible, so I have been playing around with ways of working with a photo. Pat said she was hoping to see some of the many Ecuadorean buildings I photographed on our trip, so that seemed like a good starting point. 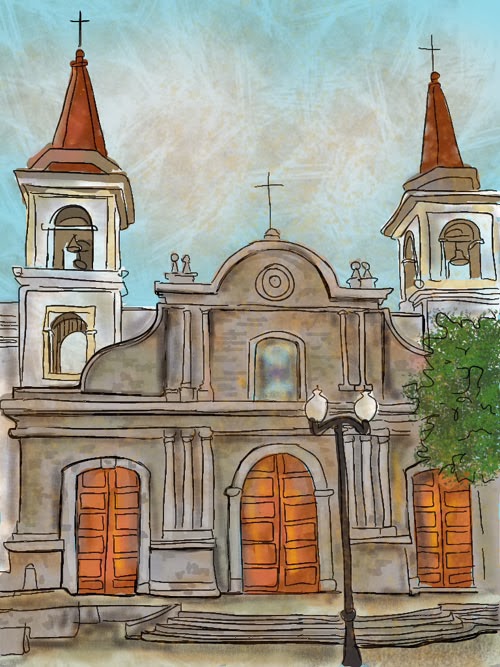 Here is the second—a flower shop that was around the corner from the church in Ibarra. I took a different approach to this one. 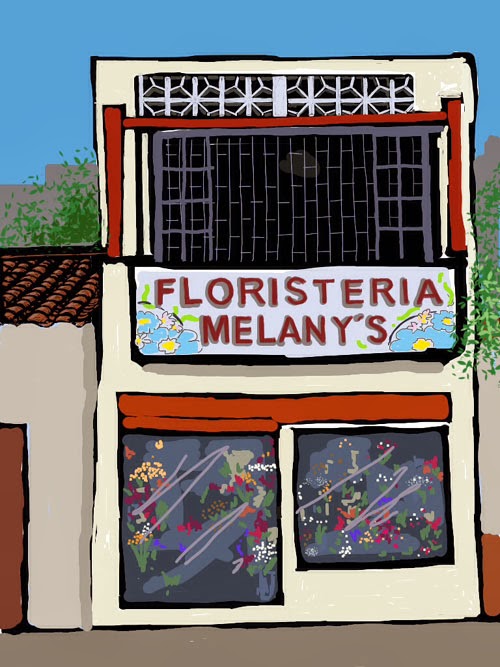 For this one I also started with the photo on the bottom layer and then I made a black line drawing on top. However, this time I drew thicker black lines. Then the painted layer went in front of the black line drawing. I painted the blocks of color so they slightly overlapped the black lines this time, not taking a lot of care about keeping the lines straight and uniform.

In both cases I deleted the photo layer before saving the painting.

So, here is what I learned. Making lovely, precise line drawings using the stylus on the iPad is difficult. (I think, in part, because you can't lay a part of your hand down on the iPad to steady it as you would do using paper) In the first piece I feel the drawing is weak. The quality of the line is not good and it has an awkward look. I wasn't very happy with this result. The second one has its own problems, but overall I like the crispness and energy of it much better than the first one. Interestingly, I realized at some point, that this technique is very much like my fabric art technique, where I fuse fabrics onto a dark background and allow the lines to be created simply by leaving space between the applied fabrics. I think the first painting of the church has a tight, busy feel that is common when working directly from a photo. If I were not showing you this as a bad example I would not want anyone to see it! I think the second piece is much less tied to the photo and has more life of its own.
Posted by Terry Grant at 2:51 PM