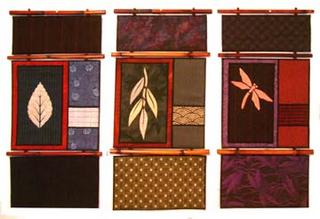 Several months ago I was given a small bag of scraps of a new material called ETAL, which is described as "real metal on a textured, flexible substrate". These samples were handed out at a guild meeting with the invitation to experiment with the material

I made the three small hangings using the ETAL for the leaves and dragonfly motifs. You can probably see that the material comes in different colors--silver, gold, copper, green gold, etc.

Interesting stuff to work with. It cuts like a card stock, but is stronger than paper--rather like non-woven interfacing with a metallic surface. It cuts easily and can be sewn through easily. When I ran out of the scraps I was given I was able to find a couple of sheets of it at a scrapbooking store. There is also a web site: http://www.etalcraft.com/product.htm

I made the three pieces specifically for a show at the Portland Japanese Garden http://www.japanesegarden.com/ that was held in July. I sold all three.
Posted by Terry Grant at 9:46 PM