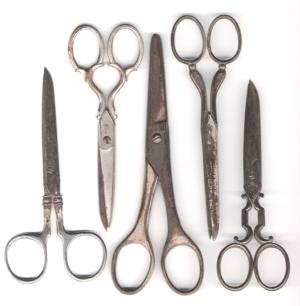 I have about 40 pairs of old scissors that I hang on a wall. I like the way they look. These are a few of my favorites.

I used to think that scissors were invented by Leonardo da Vinci, but apparently there is evidence that scissors were being used in Rome in the 1st century and maybe even earlier. Such a simple, elegant tool. And such a great graphic design.

I buy them at garage sales and junk stores. I find a lot of them at estate sales, sometimes with the sewing items, but just as often out in the garage in a bread pan or coffee can full of odd tools. These are the ones that probably got too dull for sewing and were relegated to cutting twine. Nobody thought to hang them on the wall. Well, I did.