I simply cannot believe that the "summer of love", 1967, was 40 years ago. Where have those years gone? Awhile back Ray asked me, "do you remember the first time you heard Sgt. Pepper's Lonely Hearts Club Band?"
Of course I do. 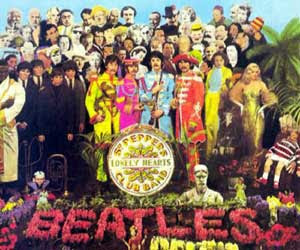 It was almost exactly 40 years ago, June, 1967. I had just finished my Junior year of college and my boyfriend and a friend of his and I were going to pick up my sorority sister, Carol. We planned to go out to the lake and swim. When Carol met us at her door she said, "come in for a few minutes and listen to some of this new Beatles album. It's so different . . ."

We began listening and it was like nothing we had ever heard before. Something very new. At the end of each song, one of us would say, "play it again, play it again." That music is now such a part of our culture that it is hard to hear it for what it was at the time. It seemed a whole new way of writing songs. A whole new sound. They were songs about "something". I remember, especially "She's Leaving Home." It was heartbreaking and real.

Wednesday morning at five o'clock as the day begins
Silently closing her bedroom door
Leaving the note that she hoped would say more
She goes downstairs to the kitchen clutching her handkerchief
Quietly turning the backdoor key
Stepping outside she is free.
She (We gave her most of our lives)is leaving
(Sacrificed most of our lives) home
(We gave her everything money could buy)
She's leaving home after living alone
For so many years. Bye, bye

We never made it to the lake that day. We played the album over and over until we knew the songs by heart. They have never left me. The sun went down and we sat on the floor in the dark listening until, finally, we drifted off to find food, humming "Lucy in the sky-yi with di-i-amonds. . ."

It was a sweet summer, with lots of talk of going to San Francisco (I didn't go, but that was reputedly where the action was) and working at the City Rec. Day Camp by day and hanging out with friends at night, listening to music, drinking beer, solving the problems of the world or dancing at the Cedars Club out south of town. It was a lull before the storm. We couldn't see it coming, but right around the corner the turmoil of 1968 was waiting. It was before the assassinations of MLK and Bobby Kennedy and the riots at the Democratic Convention and the election of Richard Nixon. None of my friends had gone off to Viet Nam yet. It was the summer of love and the summer of Sgt. Pepper.