I have to admit I am a big fan of American Idol. Tonight the adorable David Archuleta sang this bittersweet Billy Joel song. (You can hear Billy Joel's version here) I think he did a beautiful job with the song, though I am probably rooting a little harder for the other David than for David A.

And So it Goes. You may suppose that the name of my blog, And Sew it Goes, was chosen mainly because of the corny "sew/so" pun, but I go back a ways with that phrase.

I am a fan of Linda Ellerbee, the journalist, who ended her newscasts, always, with the phrase, "And so it goes." Her writing and delivery were so eloquent, so beautifully expressed. For me she brought compassion and humanity to the news in a way that no one else ever has. She has gone on to produce childrens' news programming and having survived breast cancer, has become a speaker and activist for breast cancer research and treatment. Her autobiography was titled "And So it Goes." She is one of my heros. 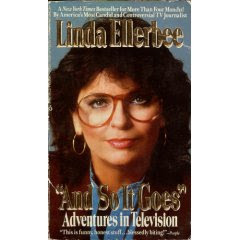 Many years ago (1993, to be exact) I found my way onto the internet and discovered the Quiltnet listserve, which was my first exposure to what has become the amazing online community of quilters and artists. At that time the internet and listservs seemed very impersonal since there were no ways of posting photos easily at that time and no one had web sites or blogs. There were several Terrys/Teris/Terries on Quiltnet and I wanted a way of distinguishing myself in my posts, so I started using "And Sew it Goes . . ." as a signature line. It seemed a natural choice when I named my blog.

For me it means we are all in the river of life—where we started doesn't really matter, where we are going is too far ahead to see. We are in the stream—and so it goes . . .