When Beth and I walk we talk about all kinds of things. We are coming to the end of our 6th year of morning walks together, which is quite amazing to me. It was a New Year's resolution that we have really kept! After 6 years we still find lots to talk about as we walk.

This morning Beth was telling me that she had seen the old movie The Red Shoes on TV this week. What a memory that brought back! When I was a pre-teenager this was my favorite movie. It was an old movie then. But the ballet—the music—the *sob* romance! And then there was Moira Shearer's red hair and her teeny, tiny little waist. It was the stuff of pre-adolescent dreams. If you haven't seen the movie you should watch the trailer at the link above. It will give you a little idea of the flavor.

The movie was based, loosely, on the Hans Christian Anderson fairy tale, also called The Red Shoes. The HCA story is pretty gruesome, actually. About 10 years ago I made a quilt based on that story for an online challenge with a fairytale theme. This afternoon I dug around and found it. 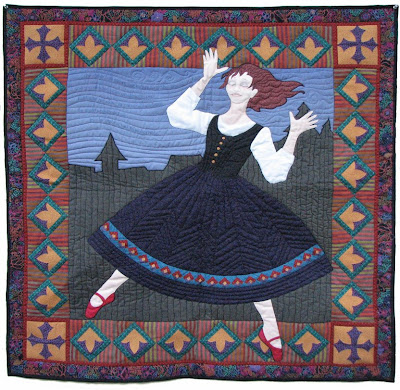 It was probably the first quilt I made with a human figure in it and I was flummoxed by how to do the face. I ended up drawing the face and leaving it unquilted. It's pretty bland. While she was supposed to look like she was in a trance and, really, in agony because the shoes would not stop dancing, she looks more like she's asleep. 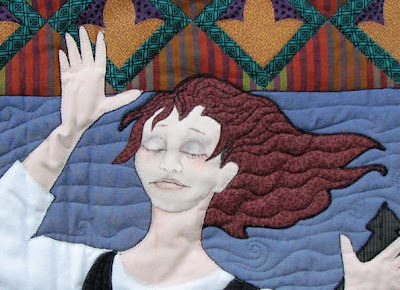 She is totally overwhelmed by the strong border I put in there, thinking it gave the piece more of a "fairy tale" feeling.

I also added a quote from the story that is too subtle. You have to get very close to read it. 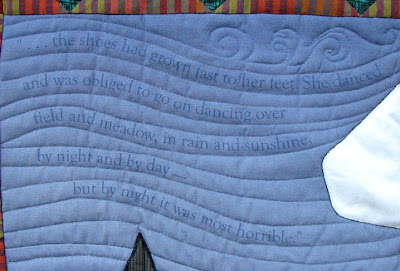 It was a fun quilt to make—not altogether successful—but I learned a lot from making it. It was an incentive to try to figure out how to make faces in fabric that worked better than this one. Do you like this one better? I do.