When I was a child my grandparents lived in Ashland, Oregon. We visited about once a year and I remember a quiet little town with a college and an outdoor Shakespeare Festival a few weeks every summer. My strongest memories are of picking blackberries and driving to the coast for the day. Many years later, when Ray finished his Master's degree he found a job opportunity in Ashland and we moved. And stayed for 13 years. By then the college had grown and so had the Shakespeare Festival, becoming the largest in the U.S. with three theatres and a near year-round schedule. Ray worked at the college. I worked at the Shakespeare Festival.
These days we go back about once a year. It has changed a lot since we lived there. It is now a haven for rich retirees. Half of the elementary schools have closed, including the one our kids attended. There are so few families with children that live there now that they aren't needed. Mansions dot the hillsides and even in this economy housing prices are astronomical.
Last week when we visited I went first to the Schneider Museum of Art, which was built when we lived in Ashland. I was a volunteer there in its first years and I think of it as a very special gift to the community from wonderful folks—Bill and Florence Schneider. The Schneiders have both died during the years we have been gone, but I always will remember them as philanthropists of the highest order. Besides the museum, they contributed to education and culture in Ashland in so many ways. I went with my friend, Muriel, to pick up her grandson from the Schneider daycare center for the children of students and staff of the university. It is a wonderful, cheerful facility that makes such a difference for young families. I remember Florence saying it was the best thing she had ever done, creating that daycare center. 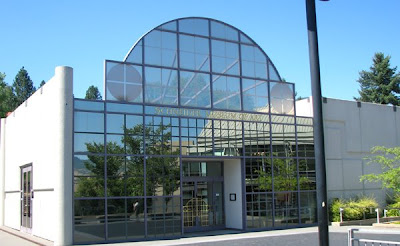 Here is the Museum. The curved approach and wall with wonderful bas relief seed pods is new since we lived there. It is all a part of the Southern Oregon University Campus and the new buildings of the art department have grown up around the art museum. 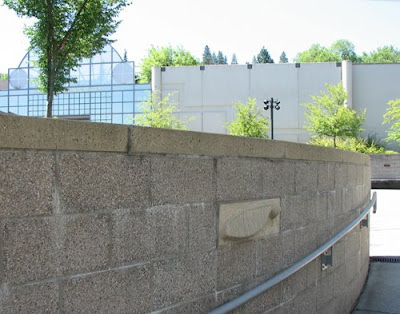 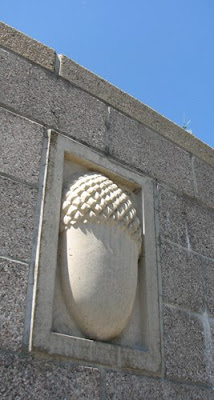 As we often do, we also drove by our old house. It looks much the same as when we lived there. Either the paint has held up incredibly well, or the subsequent owners liked my choices and have repainted those same colors. The biggest difference is the size of the trees. When we moved in there was no lawn, no trees no landscaping of any kind. The large evergreens on the upper bank were tiny potted Christmas trees the first three years we lived in the house. The Mimosa, that fills the front yard was a frail twig that we planted. The big power pole was, and is, an eyesore. We first planted pampas grass around it, but it blew fluff all over the place. Muriel, who lived across the street, hated it. We pulled that out and I planted ivy at its base. When we moved away it was covered with ivy about 10 feet up. I suppose the power company may have objected. It is once again fully exposed. But it is someone else's problem now.
Each time we return we feel less and less connected to Ashland and are really quite happy now not to be living there. But there is no denying that it is a beautiful place and will always be a part of our history. 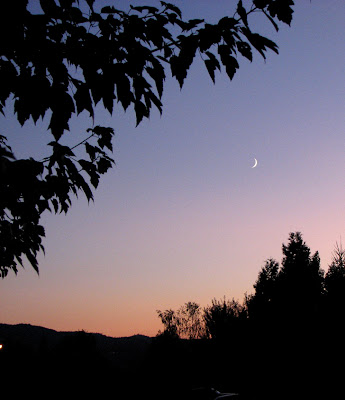