One of the things we have learned about our new house is that the deck is all but unusable in the late afternoon and early evening because of the sun, which beats in on it. The umbrella over the table does not provide shade in the right place as the sun is sinking in the west. We have discussed this and believe that a cover over the far end is probably the answer, but with a long list of projects and limited funds, it doesn't look like that will happen very soon. It occurred to me this week that if we planted bamboo just off the far end of the deck, we would eventually have shade, plus a little more privacy and the softness and rustly movement that I love about bamboo. I have had bamboo on my mind ever since and easily recruited Ray to my idea. He looked at bamboo at the garden center and came home to tell me that the pickin's were slim and what they had was really expensive. So I got on the internet and discovered this place not too far from us. Bamboo Garden Nursery sells bamboo all around the country. So we set out to find it.
It is located waaaaaay out in the boondocks. We followed the map through farm country for miles and into the forest. I began to get a little nervous when the pavement ended and the road became a gravel road, but it was just a bit farther and we were there, in an amazing bamboo forest. They grow all kinds of bamboo. There was the requisite crusty old guy who knows everything you would ever want to know about bamboo and he helped us determine that this was the bamboo for us. 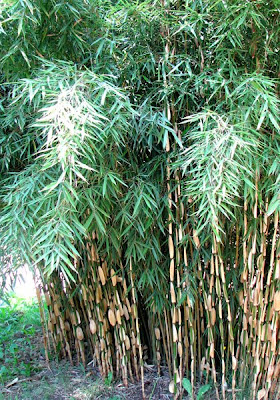 A clumping bamboo called Fargesia robusta. Those scale-like things on the trunks fall off later in the season. Very pretty and hardy enough for our climate. We bought three little ones. I hope they grow fast!

This bunch of large bamboo, next to the parking lot was amazing. The trunks (stems?) are about 2" in diameter and very tall. The dense foliage creates a solid canopy 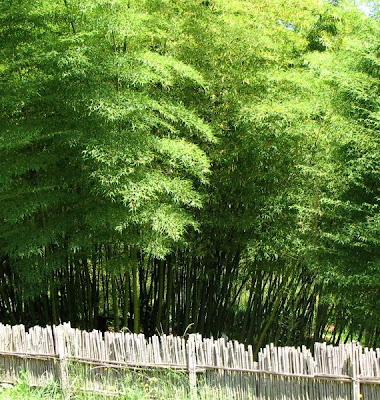 Inside one of the covered parts of the nursery there were all kinds of bamboos and mixed in among them a variety of flowers, including the bird of paradise—something you don't see in Oregon very often! 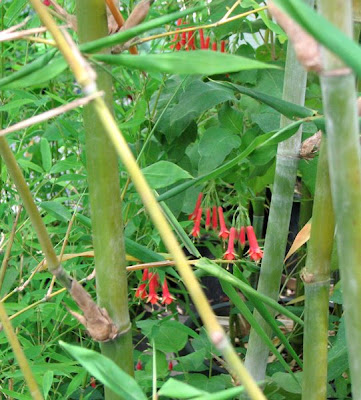 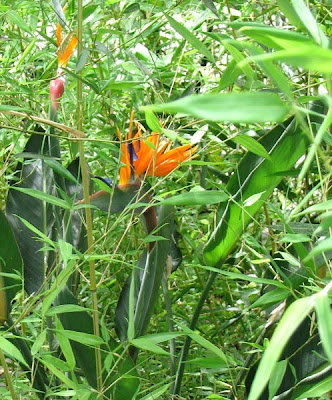 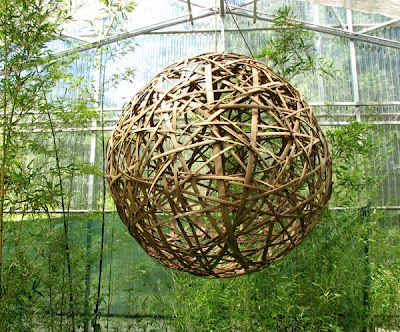 Hanging from the rafters was this huge ball woven from strips of bamboo. Near the parking lot was another structure woven from bamboo strips. You can see a car antenna in the lower left corner of the photo. This will give you an idea of its size. 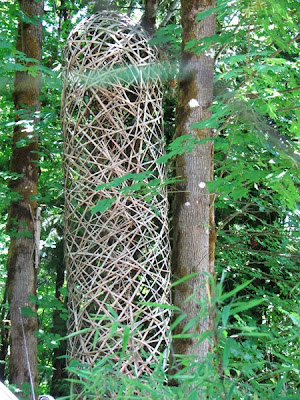 Before we left with our bamboo babies, we drove through the grounds. Beautiful, amazing bamboo of all kinds. I have never seen bamboo as tall as these long-legged specimins, growing in a clearing. They rival the Douglas Firs.

Great discovery. If you have even the slightest interest in bamboo, go to their web site. It is fascinating, with a wealth of information and photos of some very impressive projects they have been involved with.

On our way home we stopped at the Cornelius Pass Road House for lunch out on the lawn. I was ready for a nap when we got home. It has been a nice day. Ray is about to put some steaks on the grill. Happy Independence Day, everyone!