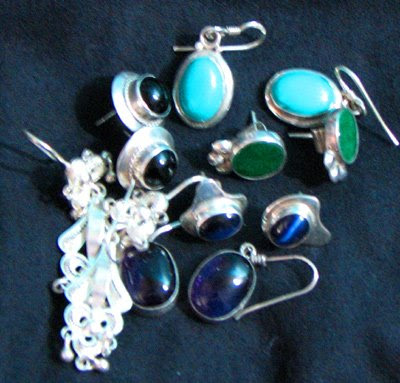 I got my ears pierced when I was in college. My roommate did it. She was a nursing student and felt very confident about poking needles through human flesh. We made an event of it. Invited our friends to come and watch, made popcorn. My ears were numbed with a piece of ice, then pierced with a sewing needle that went into a piece of styrofoam that came out of the top of a bottle of Alka-Seltzer. I wore my little gold studs for several weeks and cleaned the pierces fastidiously. Both ears got infected. My face swelled up. I developed an allergy to nickel that I have to this day. But the important thing was that I had holes in my earlobes from which to hang pretty little baubles.

My friend Carla claims that she was so traumatized by my ear piercing experience that she could not bring herself to have hers pierced for another 40 years!

My mother was opposed to the idea and felt that pierced ears were an outward symbol of an inner moral decrepitude. I won't tell you what kind of women she told me had pierced ears. She was, understandably, not very sympathetic to the infections and allergy, though I think she finally accepted the idea and didn't put up too much of an argument when my sister followed suit a few years later.

Earring acquisition became a fundamental goal in my life. Sterling silver became my drug metal of choice. About 11 years ago we went to Ecuador for the first time and a trip to the open air market in Otavalo opened up new silver earring opportunities. The photo above shows some of my favorite Ecuadorean earrings in my collection. 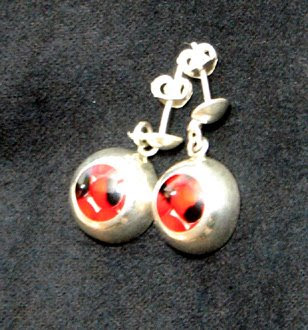 These are my newest pair, brought to me from Ecuador by my daughter. The red that you see are Amazonian jungle seeds that are brilliant red with black spots on them. They are suspended in a clear resin and set like stones in the earrings. I think they are beautiful and so unusual. The name of the seeds is "wairura" according to the person who sold them to Emily. I have googled the word and don't find anything. Whatever they are called, I love them.

Update-the rest of the story! My sister emailed me. She was so intrigued that she did a little research about my earrings and the seeds inside. She also corrected my recollection and said that, due to being grossed out by my ear piercing experience, she waited until she was 37 years old before getting her ears pierced. I had forgotten that. I guess I had a big influence on ear piercing in my immediate circle! Anyway, she also sent along this cool photo of the seeds on the Amazonian jungle tree, listed under an alternative spelling "huayruho". Thanks Beck! 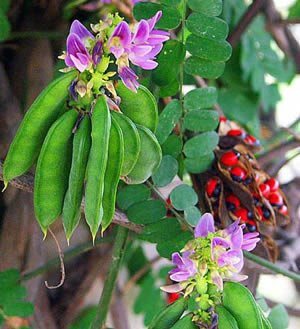