This morning Ray had left the empty salt container on the kitchen counter to remind me to buy salt. 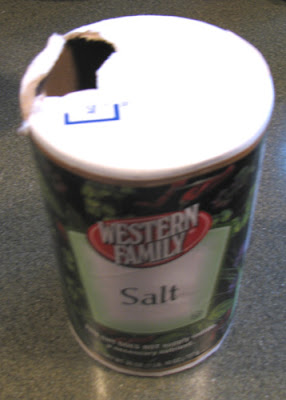 Salt is something I don't have to buy very often. I'm sure this box has lasted for more than a year—maybe even two years. Long enough that the little metal pour spout thingie fell off. Actually that might have happened the day I opened it. Not a great design in my opinion. This is the salt I use for cooking. Ray made homemade noodles yesterday and finished off the box. I have a salt grinder from IKEA that holds chunks of sea salt. If food needs salt after cooking that's what we use. They say sea salt is "saltier" and you use less at the table. I'm skeptical about that, but I like the idea of grinding salt and it is prettier than plain old salt and I like the crystalline crunch. The salt in the box cost less than $1, if memory serves. The sea salt is a little more. 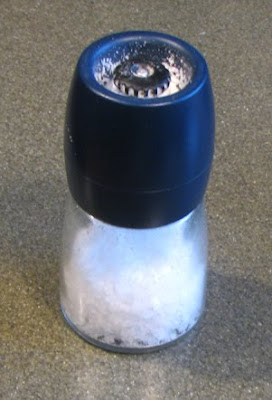 I read the Sunday paper over breakfast and read this article about "artisan salt". Hmmm. Seems this couple has a store in N. Portland where they sell fancy salt. This is not like garlic salt or celery salt, this is salt from exotic locations that contains some traces of minerals from their origins. Their basic salts run between $3.50 and $11.50 for a 1.5 ounce package. (the box above holds 26 ounces). Fancy smoked and volcanic salts are quite a lot more. My eyebrows shot up as I read, "Why use artificial chemicals in your cooking when you have a 100 percent natural salt made by guys using wooden rakes along the shores of the purest oceans in the world — with methods perfected by 3,000 years of experience?" He calls regular table salt an artificial chemical. Hmm. I looked at the ingredients on my box of salt—salt.

Seems the use of regular, or even kosher salt is a mark of poor taste, as he (shop owner Mark Bittner) goes on to say, "I say if the cheese at your house is Velveeta, then the salt you keep there can be kosher. But, since salt is the most effective flavor enhancer in food and the most commonly used ingredient in recipes, why not use a good one?" By now my eyeballs were rolling like pingpong balls. When describing the "spectacular" taste of an exotic Hawaiian salt on popcorn, he finished by saying, "I have salt moments like this almost every day. When I don't, I am told that I mope." I was snorting and guffawing by now. If you can stand more, go read his wife's fantasy about salt made from Marlon Brando's tears! I'm not making this up.

I remembered a story I heard years ago. Ray's father was a prisoner of war in Japan during WWII. The survivors of that camp used to meet yearly. Theirs was a bond that kept them in contact until the ends of their lives. One year Ray and I went to their annual dinner and I sat next to one of the former POWs and he told me the one little thing he missed most during those years was salt. A diet of rice and some occasional root vegetables was almost unbearably bland. A little salt would have made a world of difference. At one point he was taken, by ship, to another camp and he said when the ship pulled into the dock at its destination, the docks were adjacent to a mountain of salt processed from sea water. He said he wanted just a handful of that mountain of salt, even a pinch, but of course had no way of getting to it, but as the prisoners were taken from the ship past the salt plant they could taste salt on their lips, from the air. "Heavenly", he said.

I got my groceries at Trader Joe's this afternoon. The salt they carry is sea salt, but the salt, itself, looks exactly like the old Western Family table salt. The only ingredient: sea salt. It cost $1.49 for 26.5 ounces. The higher price may be, in part, because of the packaging, which looks to be superior to the old paper box and metal spout. It seems like a bargain to me. 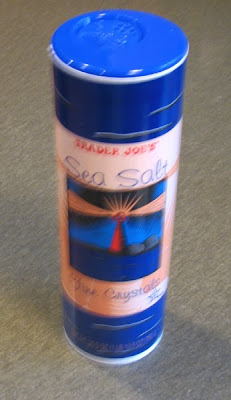