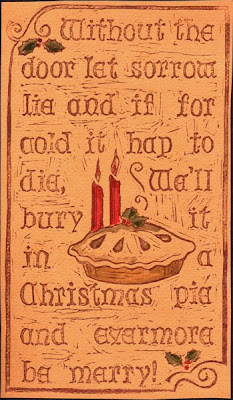 Another Christmas card from about 1981. This is another lino block print, with some added watercolor. I have no recollection of where I found the verse—kind of has the ring of an old Carol, but who knows? It's a worthy sentiment for these times.

I went along with my daughter, son-in-law and Sofia to visit Santa at the mall a couple nights ago. It was a hard decision for a two-year-old. She was interested and excited to see Santa, but also a little scared. The scary part was getting the better of her, but I could see that she was fighting it. Having Mom and Dad with her helped, plus not having to actually sit on his lap, but there was a look of terror that crept into her eyes the closer she got. When the photographer said "smile" she tried, but it was more like a grimace, then Santa asked what she wanted for Christmas and it came out in a sort of desperate, strangled sob— "I wwwwant a Hello Kitty Booooook." Then it was over and she was elated at having done this scary thing and survived and delivered her message to Santa. I was so proud of her baby courage. Have I told you what a great kid she is?
Posted by Terry Grant at 11:12 PM