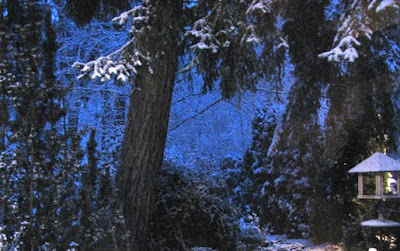 This was the view out my front window late yesterday afternoon. The snow started coming down about 3, to everyone's great surprise. The weather guys missed it completely. It snowed like crazy for several hours—just long enough to send the entire city into a tailspin. Everyone left work, apparently at exactly the same time, about 4, and headed home, which resulted in total gridlock. At 11 last night some of them were still trying to get home. I went out to the grocery store about 4 and had a very slow trip home, watching cars slide and spin their wheels and some give up the idea of getting up our little hill and turn around in the middle of the street. Several cars were abandoned in front of my house. Craziness. My car, with its all-wheel drive, just plowed on through with no difficulty. Then I spent the rest of the afternoon and evening inside enjoying the incredible beauty. Isn't that blue in my photo amazing? It really looked just like that. No Photoshopping employed.

Ray flew home from So. Oregon last night and took the MAX train, from the airport, through the city, bypassing all those cars, still sitting on the freeways. I picked him up at the Beaverton station and we were home in no time. It was already starting to thaw and rain a little by then.

You really have to love a surprise snowstorm. It reminds you how little control we really have despite all our science and technology. Best to view it as a gift and enjoy. I can say that, but I wasn't trying to get home from downtown . . .
Posted by Terry Grant at 12:45 PM