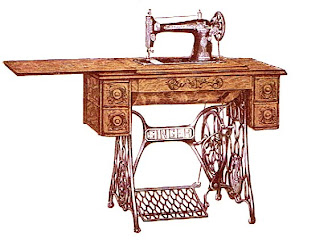 The first sewing machine I ever owned was this early 20th century Singer Treadle model. I still own it. It is out in the garage right now, waiting for my studio to be built, where it will resideIt looks exactly like this. I was 10 years old and a friend of my mother gave it to me. I sewed so many things on this machine, starting with doll clothes and then my own clothes. I remember making a red, black and white print dress, trimmed with white rick rack that won a blue ribbon at the Bannock County (Idaho) State Fair. 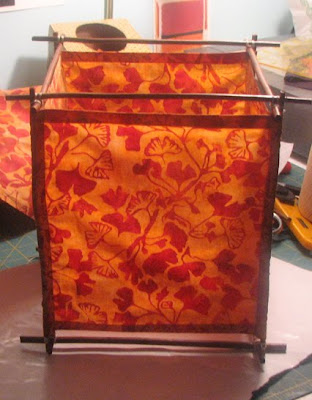 I can't imagine living without a sewing machine and I own several. My current model of choice is a Janome 6500 with a wide opening which makes it handy for quilting large pieces. It is the tool I use for the fabric art that I make. Today it was a tool for shortening sleeves and pants. Then I played around with an idea that has been floating around in my head for awhile. It is not a quilt, but a crafty sort of thing. Can you tell what I am trying to make?

Sometimes I hear people say that don't own a sewing machine and I am astounded. I can hardly imagine anyone living without one. Well, of course I know it's possible, but how do you hem your pants? It has been a rare occurrence in my life that I have purchased a pair of pants whose legs were exactly the right length. Men. I know when they purchase trousers they have far more pant length options than we women. Probably because they are less likely to own a sewing machine.
Posted by Terry Grant at 9:59 PM