Everyone knows what "comfort food" is, though your comfort food is likely different from mine. I think what most comfort foods have in common is that they are warm, rich, but not highly seasoned and probably involve childhood memories and family recipes. Also they seem to be largely white. (I have a friend whose favorite comfort food is noodles in cream sauce over mashed potatoes!)   Mashed potatoes with lots of butter is comfort food for me. Also tapioca pudding and banana milkshakes. But probably my favorite is chicken with homemade noodles. My mother made this when anyone was sick, injured, blue or was coming home from the hospital. I made it yesterday to take to my daughter's. She brought baby Marco home yesterday. 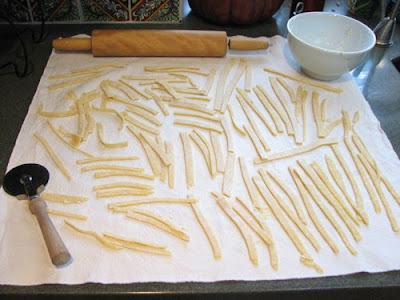 Why homemade noodles, you ask? Well, because they are so good. Nothing you can buy in a store is remotely the same. As noodles go, they are probably not what gourmet noodle makers strive for. They are big, thick, doughy and chewy. Maybe part dumpling, part noodle. What you see above doesn't look like much, but it is plenty for a large pot of chicken soup. They swell when they cook.

When Ray and I got married we discovered that our mothers did not cook the same at all. My mother was an adventurous, enthusiastic cook. Ray's mother did not enjoy cooking much and had a small and basic repertoire. What they had in common, we discovered, was homemade noodles and chicken. They made it exactly the same way, and for each of us it was one of our favorite comfort meals. Yesterday when I took it to my daughter's her husband said, "my mother used to make this!" So I guess even in South America comfort food is comfort food. Maybe everyone's mother made chicken and homemade noodles—?

In the event that your mother was the exception, here's how you do it:
Mix enough flour into two raw eggs, along with about a tsp of salt, to make a very stiff dough. If you end up with too much flour and the dough doesn't hold together, add a few drops of water. Otherwise, no water. On a floured board or pastry cloth, pat the dough down as flat as you can, then roll with a rolling pin to get it as thin as you can. It will not want to get very thin, but persevere until it is about 1/16th inch thick. Cut it into strips, separate the strips and leave them on the board or cloth for a couple hours to dry. They don't have to be completely dry when you cook them. Ray's mom had a way of rolling the dough, like a cinnamon roll and slicing it to make the noodle strips. My mother just ran the tip of a knife through the dough to make strips. That's what I did until I discovered how slick a pizza cutter works to cut the noodles—not unlike cutting fabric strips with a rotary cutter.

While the noodles are drying boil a whole chicken in a large pan of water, with a bay leaf if you have it, until the legs start to fall off and the meat is tender—probably a couple of hours. Remove the chicken from the broth to cool. Skim most of the fat and debris from the broth—sometimes I strain it if it has a lot of foamy gunk in it. Add carrots, celery and onions. Any or all, as much as you like. Simmer. When the chicken is cool enough to handle, remove it from the bone and return to the broth. I like large chunks. Add herbs if you like. I like basil in mine. When the vegetables are tender toss the noodles into the pot and cook for about 15 minutes or until they seem cooked and no longer taste like raw flour. That's it. That's the way my mother made chicken and noodles, which is the way her grandmother made them.