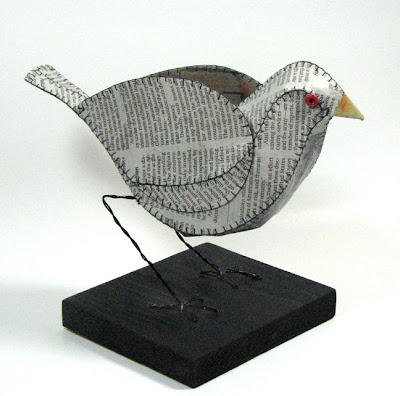 My new bird is a newsbird, made from newspaper. This is the second bird in this series of stitched birds. (Here is the first)  I made one small adjustment to my pattern, which was a simple, but I thought, effective change. See if you can spot it. Give up? I turned the wings upside down. I noticed, as I was fussing with the parts that if I turned the wings the other direction I could line up the stitching line with the one on the body and I liked the way that worked.

You may wonder how I stitched newspaper, delicate stuff that it is. I collaged the newspaper onto very heavy non-woven interfacing. I used white glue, thinned with a little water, that I brushed on the interfacing, then laid the paper down and brushed over it with more glue. It was quite nice to hand stitch through and held the form quite well. This, of course, creates the possibility of collaging all sorts of things that could become part of the bird. I considered giving this bird more of a message by judiciously cutting words from headlines to place prominently on the wings and visible portions. In the end I liked the simplicity of just text. The breast of the bird is a photo from the paper of an aircraft carrier with jets lined up on it. Perhaps a reference to flight, or if you like, a comment on the war story that comprises the text part of the bird. People can make of it what they like. I really don't have any kind of message in mind here. Ray thought perhaps the bird was a carrier pigeon (ha! ha!) but, of course it doesn't look at all like a pigeon. My friend Beth suggested, given the military references, it was a bird colonel. Groan.  None of the above. It is really just a reflection of my fondness for printed text. I think I will submit this guy for a small show that Columbia Fiberarts is having at the Museum of Contemporary Craft. The theme is "Text."
Posted by Terry Grant at 12:33 PM