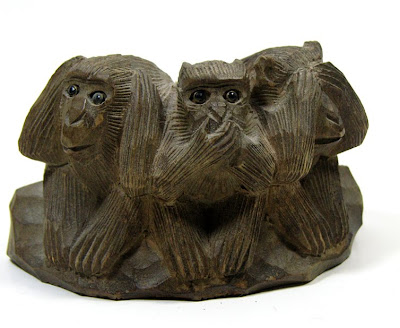 When Mrs. Roberts died my mother went to an estate sale where objects from Mrs. Roberts' home were being sold. Mom brought me this little carving, which was probably a souvenir of one of her travels.

Mrs. Roberts was an important figure in our lives. She went to Denver in 1946, when my parents were living there and I was just a baby, in order to talk to my father about coming to work for the business she and her husband owned in Pocatello, Idaho. She must have been persuasive, and she was certainly charming, because my father took the job and that is how I came to grow up in Idaho.

My father and uncle started out working for the Roberts, then gradually bought the business from them. Mr. Roberts was a gruff old guy and I think difficult to deal with. Mrs. Roberts was the opposite. She was a tiny, fast-moving, straight-talking little woman with a little tight, gray bun bobbing on the top of her head. Obviously very intelligent and with an astute head for business. The Roberts never had children and were equal partners and participants in their steel and machine shop businesses. She was as good-hearted a person as I have ever known, taking great pride in my Dad and uncle's business success and a generous and keen interest in the welfare of our families, even long after the business relationship ended. She and her husband hosted a summer picnic for the families of all the people who had ever worked for them for years—a lot of people—until they were quite elderly. It was held at their home on their large rolling lawn that had a pond and a windmill. As a child I looked forward to "the Roberts picnic" as the social event of the year. There were games and prizes for the children and great tubs of iced soda pop and heaping platters of fried chicken, followed by ice cream and watermelon and sparklers when the sun went down. Mrs. Roberts always seemed to be right in the middle of all the children, enjoying every bit of it just as much as we did. Incredibly, she knew every child's name and who they belonged to.

In their old age the Roberts traveled the world on freighters and took cruises and played in bridge tournaments held on cruise ships. She came to our weddings and brought us extravagant gifts. She told me about coming to Denver to meet my Dad and what a lucky day that had been for her, almost every time I saw her in those last years after Mr. Roberts died (on board a ship).

I think of her fondly and the three wise monkeys seem to me to be the perfect way of remembering her. "Hear no evil, speak no evil, see no evil."

Ever wonder what the origin of the monkeys and the saying is? So did I. Confucius, apparently.
Posted by Terry Grant at 4:33 PM