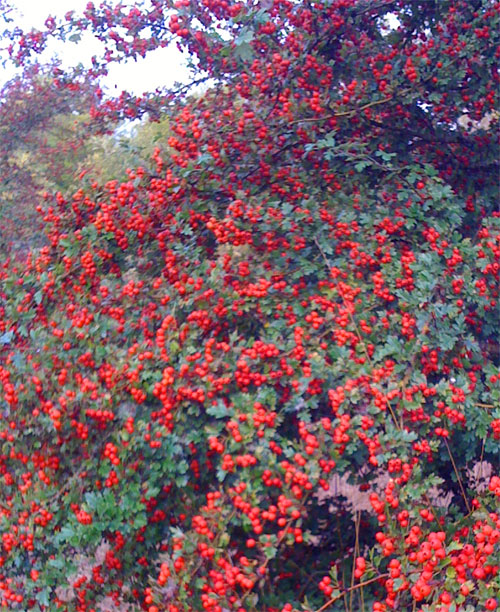 I have been in denial, but I have to accept that summer is over and fall is here. The leaves are not yet doing much here, but this brilliantly be-berried hawthorne, seen on our walk this morning was a clue. We turned on the furnace today. It was just darned chilly around here when we got up today.

I spent much of last week at the Northwest Quilting Expo where all the Twelve by Twelve quilts were being shown. I didn't take pictures, but Gerrie did. You can see them on her blog if you haven't yet seen enough of the Twelve by Twelve quilts. I ended up making the trip across the city to the Expo Center five times during the course of the show. When I discovered that they were charging $8 to park, each time, I decided to make most of my trips by MAX light rail, our public transportation system here in Portland. Somehow traveling across the city this way seems like a bit of an adventure, especially in people watching, but also it gives me a view of the city I don't see from the driver's seat of my car. There is an old part of Portland, a little grimy, a little rundown, that the train runs through and I have enjoyed seeing lovely old houses that may have seen better days, and old hotels and motels along a street that used to be a main thoroughfare, but no longer. I see a lot of old people in those neighborhoods and suppose they have been there a long time. I love crossing the Willamette river that divides the city and watch for big ships, dragon boats, sailboats. One day as we crossed I saw one of the bridges just up river open for a big boat. Many of the bridges lift or open, but it is surprisingly rare to see them in that position. 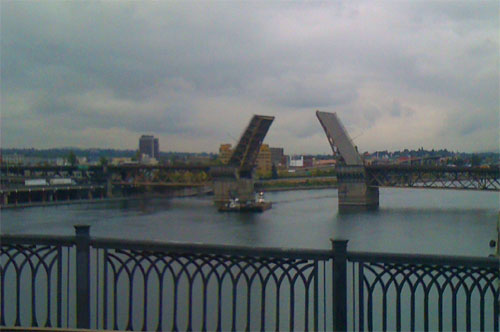 Last week's show was the last time all the Twelve by Twelve quilts will be shown all together. The Colorplay series will go to Australia for a show and the Theme series will go back to the artists. They are stacked in my studio and I will start sorting and packing them up later this week.

I am still thinking about the class I took and pondering where I go from here. I turned down an invitation to submit work to a themed show this week. I had to gulp twice and hope I was doing the right thing. It is a good show, but I knew it would be a big commitment and distraction from my refocusing efforts. I feel like I am making a change, but at this point it is all in my head.
Posted by Terry Grant at 10:58 PM