From Artichoke to Rutabaga 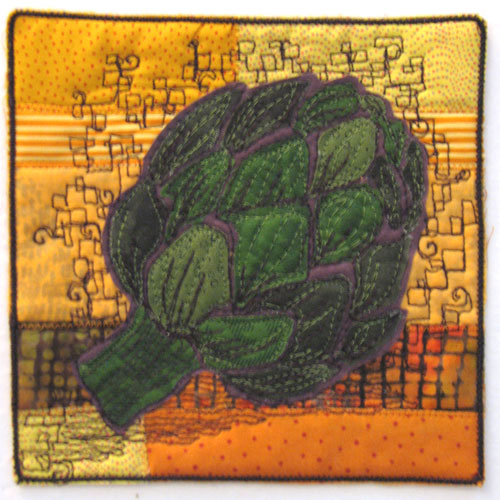 I have had such big projects going that I felt the need to work on something very small today. This little piece is 6" square. I am trying to make some small pieces for the Open Studios in October. It was fun to just bang this out.

I have had another idea circling for awhile that I finally got to today. I almost hesitated to post this because it is a truly nerdy idea, but I'll bet you've considered something like this. I have these shoes. I bought them at Goodwill and they were like new and very, very comfortable, but ugly. They made me think of Little Orphan Annie. Children's shoes in a very large adult size. Minnie Mouse shoes. The thing is they really are comfortable. Maybe you can see that they are lined with very soft leather, over very squishy foam. They fit just right too. Except for one thing. Those Mary Jane straps are insidious. They seem OK at first, but as you wear the shoes the straps begin to rub. Then they feel tight. I made them as loose as possible, but still tight and they hit at kind of an awkward part of my foot. So I quit wearing them. 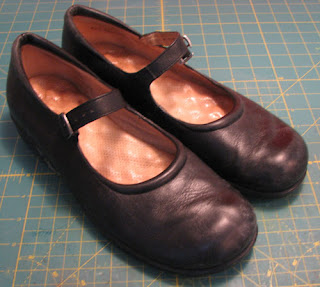 I looked at them with disgust one day and thought, "I wish I could just cut the straps off." So today I did. 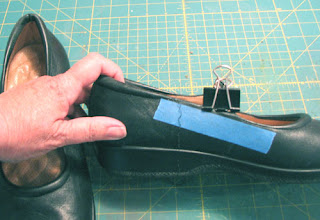 I used a piece of masking tape to see where the line should go and cut the straps off, leaving enough of the leather to turn the edge under and glue it. I had to trim some lining away inside and I considered trying to sew the edge, but that was getting complicated. I just glued down a little "hem" along the outer cut edge, then glued that to the leather lining. I used Fabri-Tac glue, which says will work with leather and used some binder clips to hold the glued edges together while they dried. 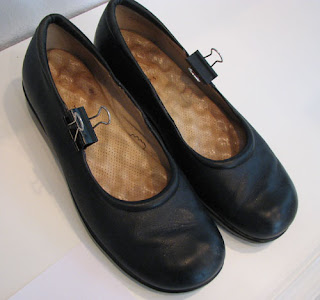 I left them to dry for several hours and removed the clips and trimmed the lining. They look pretty good. I have no idea how well the glue will hold up. If they come apart I won't have lost much. They sure feel good on my feet though! And I think they look less dorky too. 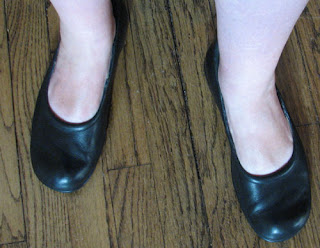 So, after all that productive work in the studio, I cooked rutabaga oven fries for dinner. I have never cooked or eaten a rutabaga, but I have been reading about them. I used this recipe. 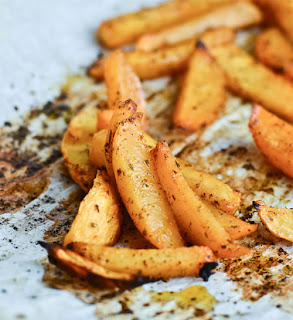 photo stolen from the recipe site. They look better than they taste

I was unable to find the seasoning blend used in the recipe, but used some seasoning salt and sprinkled with Parmesan when done. They were edible and not terrible, but far from exciting. But now we have tried rutabagas. The best thing was dessert. When I went to our fancy grocery to buy rutabagas, I couldn't resist a little carton of ginger ice cream. Now that was exciting! I think next time I will try the French Lavender. And skip the rutabagas.