The Rogue Gallery is a nice art gallery in Medford, Oregon, which is in Southern Oregon, about 5 hours drive from Portland. It is named for the Rogue River, not for the kind of art they display! Our High Fiber Diet group has tried in the past to get our shows into this gallery without success, but this time around they decided to show our "Elements" show. It seemed like we ought to show up in strength for the opening reception, which was last night, so quite a few of our members and spouses and friends went. It worked well for me. Ray and I lived in Ashland, which is just about 10 miles from Medford for 13 years and have friends and family in the area. We drove down on Friday and spent the night with our friend Muriel, who came to the reception with us.

Some of our members in attendance. 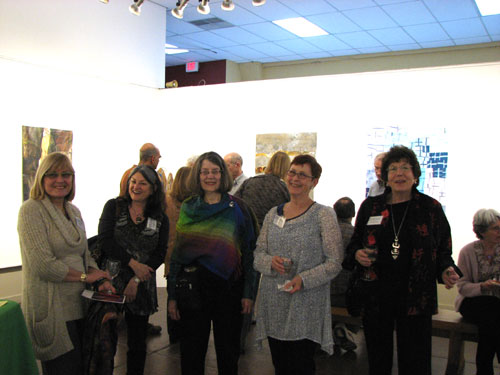 Being brutally honest, I have to say the show has strengths and weaknesses, but it looked awfully good in the gallery! Amazing what expansive white walls and good lighting does for art. 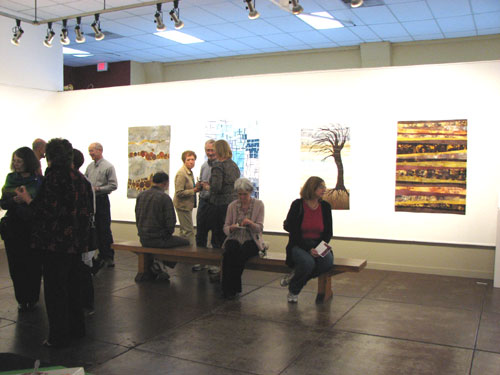 Remember how it looked at the Woodburn Art Center? Pretty good, but not this good. 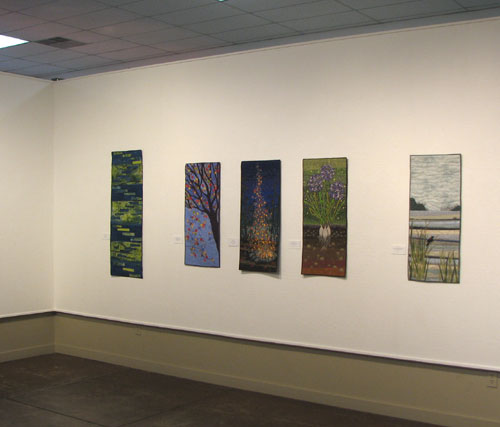 Here were my four pieces with Gerrie's water piece at the left. Odd spacing, huh?

And my favorite thing was that they served good wine and cheese and in another area were gorgeous chocolate truffles and strawberries. Seemed like they really went to some pains to make it a nice reception. 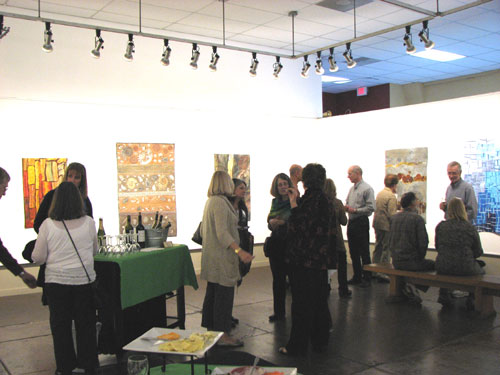 There was a good crowd and lots of nice comments. One piece (not mine) sold during the reception and that is always good!

It was a quick turnaround. We left after breakfast this morning and headed back toward Portland. Ray wanted to stop at the casino in Canyonville, so while he played a little blackjack I perused the gift shop and bought myself a cold drink which I took out to the car and read a magazine. I really hate casinos and don't like to gamble, but he wasn't there long and more than doubled his money and we were on our way. We were barely back on the road when I got a text from Gerrie. She and her husband had come down as well and were ahead of us on their way back home. She said there was a big accident up ahead and all the traffic was sitting at a standstill. So we decided to stop in Roseburg for lunch, instead of where we had planned on further up the road, near where the accident was. When I was walking into the restaurant I found a $10 bill on the sidewalk. After the casino, we felt like we were on a lucky roll. Ray said my find was better than his win, even though a smaller amount, because I wasn't even trying!

Incredibly, after lunch, we found that the wreck had still not been cleared and we were delayed by nearly two hours, inching along the highway for miles. We finally passed the scene and it was a pretty horrible accident. You can see what we saw here. Two people very badly injured, but alive. Aggravating, frustrating and sobering. So it was a long trip home.