My feathers got a little ruffled today...

I started making birds way back at the end of 2007.  I made more. Then I started selling them on eBay. Then Pokey Bolton asked me to submit an article and pattern for a Quilting Arts special magazine called Quilt Festival Quilt Scene. Then she asked me to tape a segment for Quilting Arts TV and show how they are made. The pattern is still up on the Quilting Arts TV web site here, and apparently people are still making them. Here is how they looked in Quilting Arts magazine. 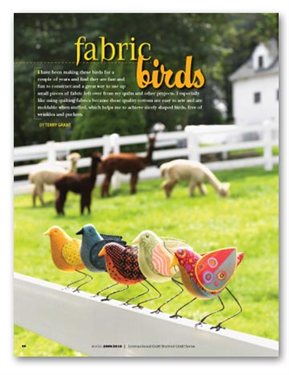 I run across them every so often on the web and it always makes me so happy to see that someone else has made one of the birds. I started a Pinterest board of the ones I have found.

This morning a friend directed me to the FaceBook page of a woman in England named Angie Hughes, who had posted this photo. 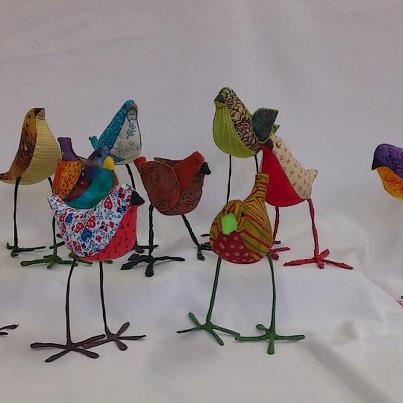 Yes, they are birds made from my pattern. Ms. Hughes, it seems, teaches workshops at a local shop on making the birds and these were the latest flock. Cute.

I was surprised. I didn't know about all this. Although the pattern has been published, it clearly states that the pattern may be reproduced for personal use. Reproducing for sale for workshops is not personal use, but this was not what really surprised me the most. What really surprised and disappointed me was that nowhere that I found Angie Hughes versions of the birds—not on the FaceBook page, not on her own web site, not on the shop web site where the class was listed, was there any credit given to me as the designer. My name appeared nowhere.

I'm not going to get into the issues of copyright violation, though there is that (she is also selling the birds on her blog and web site).  This happens and it is hard to stop and, honestly, I'm not interested in tracking down and punishing anyone doing that. I simply think that when the pattern is used in a public way and/or published on Facebook, blog, web site, etc. that the considerate, honest thing to do is to give credit to the designer. So, I am not angry, but I am disappointed that this person is representing this design as her own, if not by actually claiming it to be, at least by failing to give proper credit and letting people assume it is her original design.

Though the bird pattern looks simple, I put a lot into its design. I made dozens of birds until I got the design the way I wanted it to be. I drafted the pattern and wrote the directions and I am thrilled that people like it. I'm proud of it. Maybe you can understand why I want credit for it, or maybe you think I should just be flattered that somebody likes it that much.

By and large the fiber art online community are incredibly generous with their ideas, their techniques, their sources and their "trade secrets." I like that and I have tried to give back as much as I have gotten. The other side of that coin is acknowledging and giving credit and appreciation to the people who share their gifts and their work. Maybe Angie Hughes just forgot. I'd like to think that's the case.
Posted by Terry Grant at 11:02 PM