Sometimes I wonder why I get mixed up with "groups". This week was one in which I once again got into hot water with a group I belong to. The problem, always, is that I have opinions and opinions are not that popular with groups. Groups like to be of a common mind. They like to say, "Hey, here's an idea. Let's all do this!" And they expect everyone to say, "Yay! An idea! Yes, I'll do it!" But some of us say, "Wait up—is this really that good an idea? Did you think about this? Do you think this might happen? Is what you are proposing even ethical, or doable?" Or, as I am tragically prone to say, "This is a bad idea, and here's why..." And then the group gets all up in your face and tells you you are a troublemaker and you have "a bad attitude." And one or two write you private emails ("for your eyes only... please don't share this...blah, blah, blah") and explain in detail how you are just all wet and a mean person and even that "really smart people thought up this idea" and you just need to get on board. It is true—many people do not evolve beyond the seventh grade. This is why people-with-opinions, go off and live in the woods by themselves.

Me, I go to the studio and putter. Today I was working on some projects, including the cafe and listening to the radio. Someone was talking about confronting death as you get older and how one should ask themselves if they are doing what they would do if they knew for certain that they were dying. I know this sounds depressing. It really wasn't. I thought about it and decided yes, I am making art and spending time with my family and friends and, I hope, making memories with my grandchildren. If I knew my days were numbered I would keep doing those things. And I would probably resign from a group or two. Tomorrow we are going, with a bunch of fine, funny and fast friends, to a crab feed. If I knew I was dying, I would eat as much crab as possible every chance I got. With friends.

So, here is where the cafe stands today. 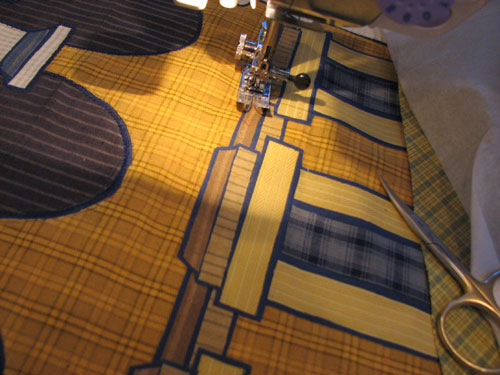 Sewing it all down. This is not the quilting part. I am just sewing all those separate pieces to that interfacing background to make the top. 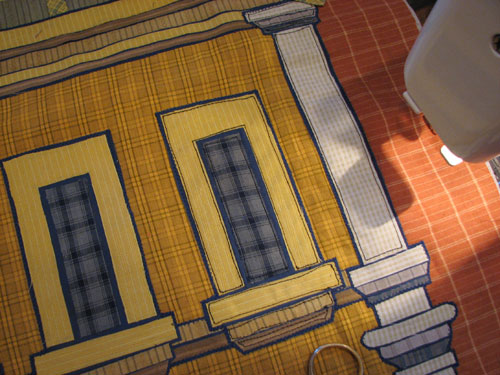 Now I am top stitching with black thread. I don't have a real logical explanation for this. I just like the way it looks and it gives it all a little definition that I like. It's one of my "things."

Have a nice weekend! The sun is shining in Oregon... I plan to enjoy it while I can.