The Quilt Festival in Houston, was not all about the Twelve by Twelve exhibit, though if you've been reading the Twelves' blogs you probably wouldn't know that!  There was the huge judged show and many, many special exhibits. I tried to get around to see as much as I could. I did not take a lot of photos. Many of the special exhibits did not allow photography (our Twelve by Twelve exhibit did). The big prize winners were lined up at the front of the hall and you can see photos of them here. The very big winners are a type of quilt that seem to exist only for the purpose of winning prizes at quilt shows and they are a curiosity to me. They are bed-sized, but clearly not destined to ever grace a bed. They are technically amazing with quilting that is hard to imagine. The best of show and others of the top winners are heavily embellished with crystals, which is not apparent from the web site photos, but in person, they are incredibly sparkly. Are they art? Hard to say. Not what I think of as art quilts. I wonder what becomes of them after the show is over.

One of my favorite pieces in the judged show (not a winner) was this piece, called "Metamorphoses" by Gabriell Paquin of Orleans, France. 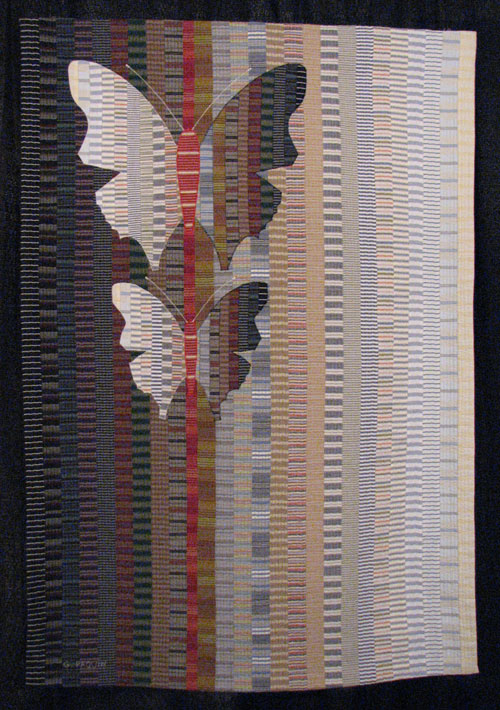 It was made entirely using woven plaid and stripe fabrics and I loved its crisp, graphic, un-fussy design.

In one of the special exhibits of Canadian quilters I was tickled to find two pieces from Pamela Allen, one of my favorite art quilters. 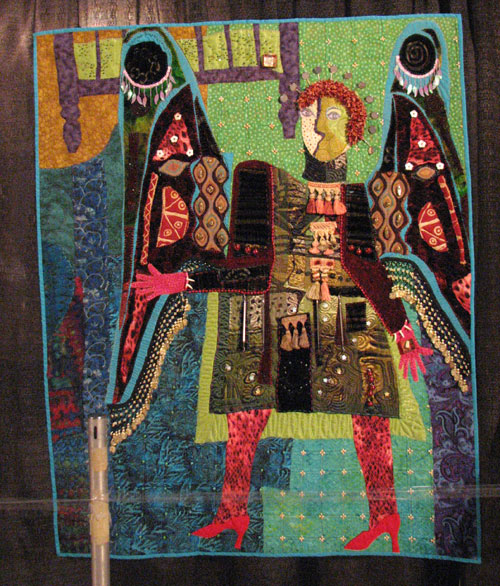 "A Very Stingy Tooth Fairy" is about a traumatic dental procedure.

This one is called "Bugs and Other Living Things." 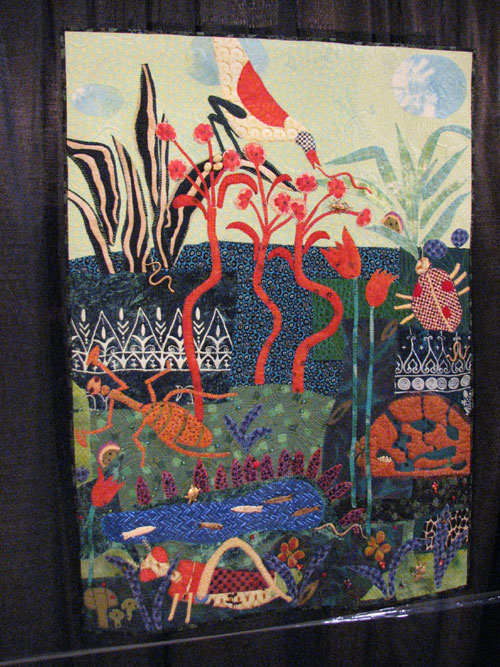 Pamela's humor and love of pattern make her work so joyful! Here's a detail from this bug quilt that I adored. 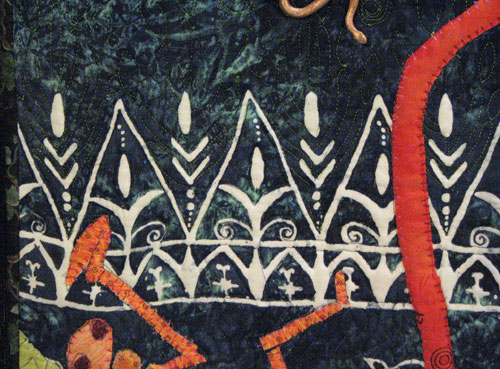 Another really delightful exhibit was artist's fabric houses, curated by Kathy York. The artists were listed with the exhibit, but there was no key to which houses were made by which artist. Gerrie and I tried to guess. 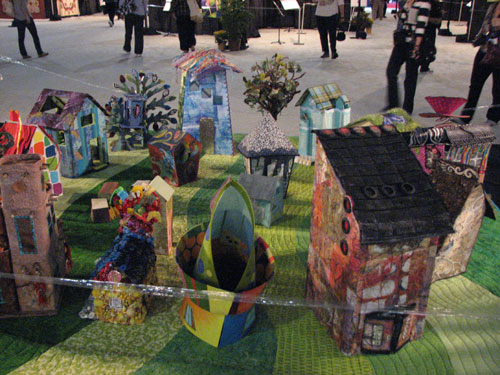 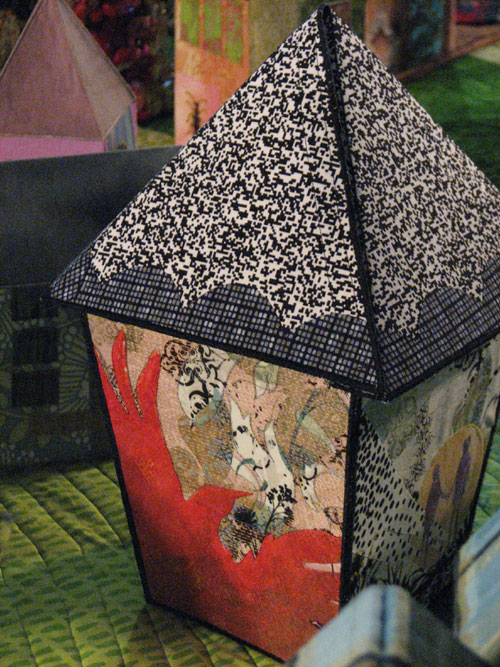 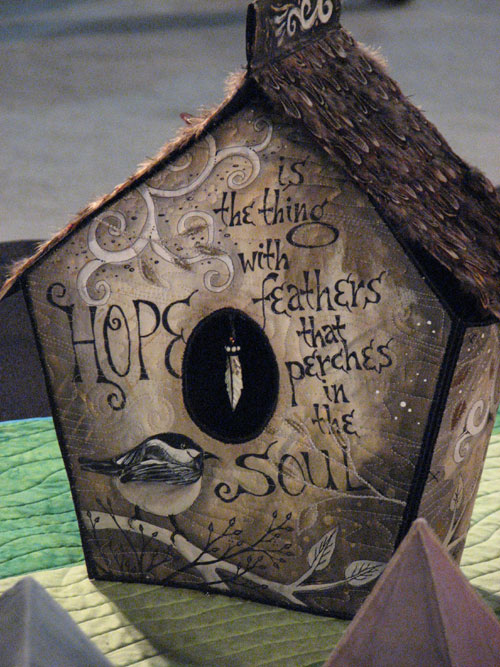 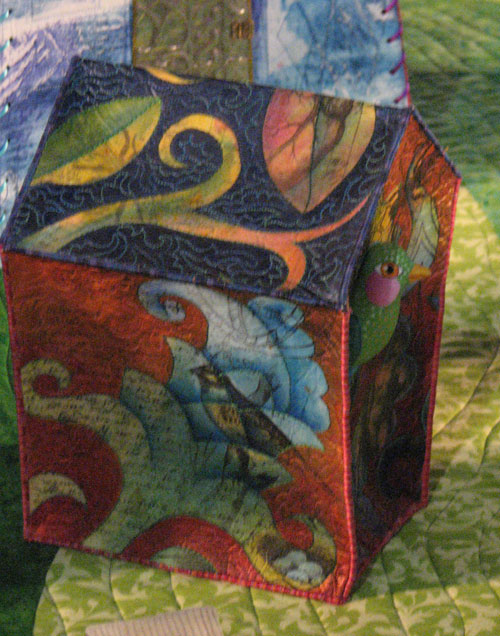 I had a piece in one of the other special exhibits that did not allow photography. "The Space Between" was curated by Jamie Fingal and Leslie Jenison, known collectively as the Dinner at Eight Artists. They organized a dinner (at eight of course) for all the participating artists who were in Houston. Great fun to meet so many of them—some I knew online for years and some new to me. Excellent food, great conversation and a bit of silliness! As we were leaving we discovered that Michael Moore had been dining just a few tables away. I will leave you with this photo. 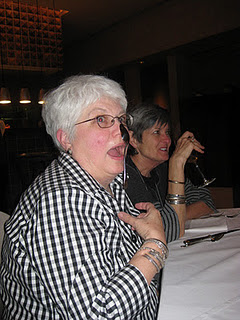 No, I was not drunk. Just participating in the Dinner at Eight spoon-balancing-on-nose ritual.  Honestly. Did I really do that?
Posted by Terry Grant at 11:15 PM