So where are the quilts I've been working on? Ummmm--I haven't been in the sewing studio for awhile. I have spent the last two days making candy. We are going to Ecuador for Christmas and I decided, with a little urging from my daughter, to make American Christmas candy to take to my daughter and son-in-law and her Ecuadorean in-laws and friends. It isn't because I'm especially famous as a candy maker. In fact my mother used to make such divine candy that I never felt the need to develope that particular skill. Since Mom died, I have tried to do a little something at least at Christmas. This is a big project for me.

Cranberry/walnut candies--mmmmm, don't those sound good? I thought so. I've never made them before, but it sounded like a nice Oregon kind of candy treat to take to South America. 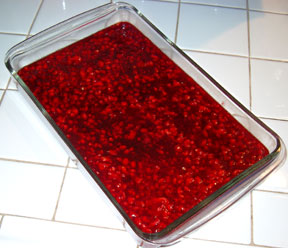 Here they are "jelling". When they are nice and firm they will be cut into squares and rolled in powdered sugar.

Next came rum balls. These are easy and I've made them before lots of times. Ray brought this bottle of rum back from St. Thomas last week. He's doing a consulting job there. He'll be surprised to see that I've been hitting the bottle pretty hard in his absence. 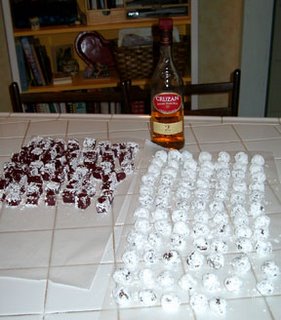 Rum balls on the right, cranberry candies cut and powdered on the left.

Next up were peanut butter balls, my sister-in-law, Brenda's yummy recipe. I've made these before too. Mine aren't as pretty as Brenda's, but they taste good. I can't quite get the hang of making beautiful dipped chocolates. Mine are a little lumpy looking. 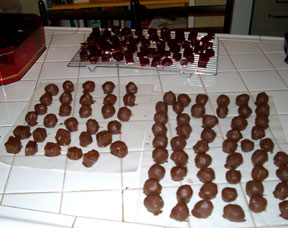 Here are the chocolate peanut butter balls. The rum balls are safely nestled in that big tin on the left and those things in the back, well those are the cranberry candies. You know how you're not supposed to make candy when the weather is humid? This is Oregon, folks. This is November in Oregon. You don't have many choices. The cranberry candies don't seem to want to dry. They wept through the powdered sugar. They formed sticky puddles on the wax paper. I now have them suspended on racks trying to circulate a little air. I hope they dry out so I can try another dousing of powdered sugar. My mother used to make heavenly divinity. It's impossible to make that in Oregon. Fudge is iffy. I'm going to try some sugared walnuts next, but I might wait for a break in the weather.
Posted by Terry Grant at 10:18 PM