There are two art gallery districts in Portland. The Pearl District has lately become the trendy, hot spot in town. That's where the upscale galleries are. The First Thursday of every month the galleries are open in the evening, many serve wine and cheese and it is a "strolling from gallery to gallery" event.

Alberta Street is across the river in a less affluent, but up and coming, neighborhood, of funkier galleries and restaurants. Their art walk event is on the Last Thursday of the month. Last night we decided to check it out. It was a wild and crazy street fair! 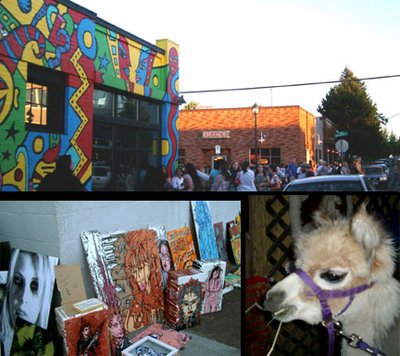 There were hoards of people roaming the streets, and along with the open galleries, artists had set up their paintings and other wares all along the sidewalks. Some of the art was very good, some was very bad and there was a lot that fell somewhere inbetween. A sidewalk display of alpaca wool featured two live alpacas. 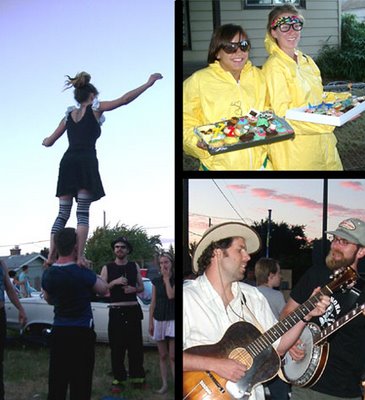 Along with the art, there were street performers and musicians and these two cute girls were selling their artfully decorated cupcakes. We bought several.

One of our favorite galleries on Alberta is Onda Arte Latina. My daughter, Emily's, friend Cristobal Gonzalez Guzman, who lives in Quito, is going to have a show there in September.

Below my daughter, son-in-law and husband are checking out the art at Onda. My son-in-law discovered some pieces by an artist from the same city in Ecuador that he is from. 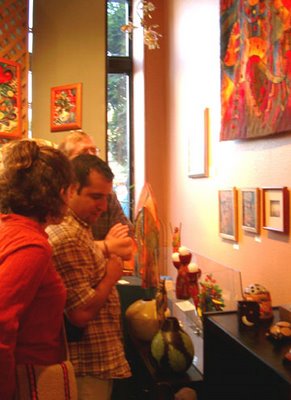