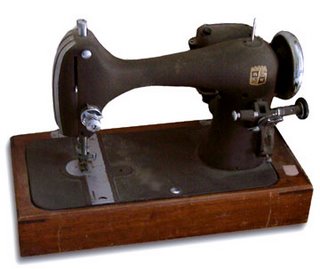 I have an obscene number of sewing machines, most of which are not really functional, but I like the looks of old sewing machines. They really seem to have a lot more character than my newer machines. This one was my Mom's machine. It sits on the landing partway up my stairs with a bunch of other old sewing stuff. I like the way it looks there, but its real function is to give us something to stub our toes on in the dark.

It is a Montgomery Ward brand, purchased, I suppose, in the early '50s. I don't remember when Mom didn't have it. She used it for years, until she inherited my grandmother's much more modern Singer Touch 'n Sew. She sewed a lot of curtains and dresses for my sister and me and I sewed all my 4-H outfits on it. Mom never wanted a newer, better machine, because she swore she didn't like to sew, although she did a lot of it and was very good at it. It is a simple machine, with only a straight stitch. And it weighs a ton.

And, see that little pinkish thing on the far right side? That's a piece of a bandage. It's been stuck there as long as I can remember. I don't know why.

Compared to some of my other old machines—Singers with gilded decals and embossed designs on the metal plates—this one is a real plain jane. But it has such a sturdy, little no-nonsense look to it that I feel a real fondness for it. It would probably still sew if I plugged it in.
Posted by Terry Grant at 12:02 PM