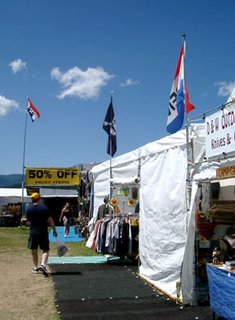 Before heading down to the Lake on Monday, several of us decided to check out the Cascade Flea Market. It was a beautiful day and I'm a sucker for an outdoor market. It was pretty festive with flags flying and all vendors promised special prices just for the holiday weekend, although the well-established look of that 50% off sign would make you wonder if anything ever sells for the full price. 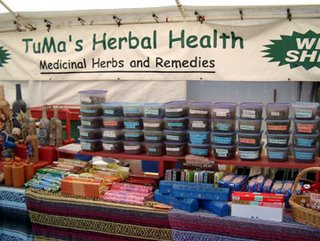 I was quite fascinated by this large display of herbs and remedies. 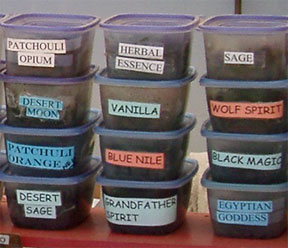 Closer inspection of those tubs revealed such potions as "wolf spirit," "Egyptian Goddess," and "Patchouli Opium"—really? 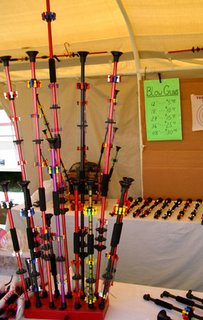 There were a lot of dangerous looking weapons for sale—swords and rather gruesome-looking knives. When I first saw this display I thought these brightly-colored objects were some kind of musical instrument. Wrong. They are blow guns, whatever those are. 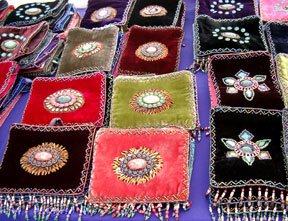 These velvet purses looked really pretty spread out across a table, but I wasn't tempted to buy one. A little too Janis Joplin for me. 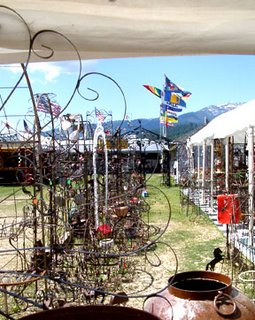 Lots of yard ornaments, most were pretty cheap and gaudy, but these metal pieces were nice. 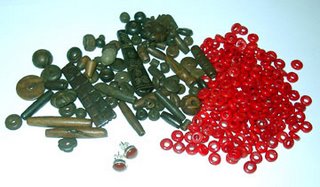 So, what did I buy? Two packages of beads and a pair of silver earrings with reddish stones (50% off, of course) and a package of crunchy dried corn snacks, which were very tasty with a cold beer down at the lake later that day. The beads were a very spontaneous purchase. The dark, ethnic-looking ones are all different and quite interesting. There is even a wee elephant in there. I don't tend to sew beads on my quilts, so maybe they will end up together as some kind of crazy necklace. Or maaaaaaaybeee I'll sew them on a quilt.
Posted by Terry Grant at 11:33 PM