Treasures from the sea 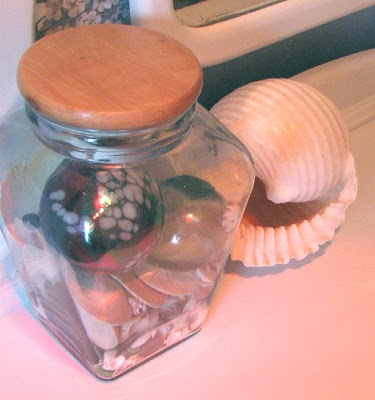 I'll bet a majority of people have a little stash of stuff they've picked up on a beach somewhere in their house—especially if they live anywhere near the ocean. My sea treasures reside in this glass jar in my bathroom. (The speckled glass ball you see in there actually has nothing to do with the ocean. It was made from Mt. St. Helen's ash, but it seemed to fit with the ocean stuff.)

Last week when I was at the beach with the STASH group we took a walk on the beach, and as I always do, I picked up rocks and stuck them in my pocket. We didn't see any shells or sand dollars this time. My jar contains shells from many beaches, but mostly the Oregon coast. 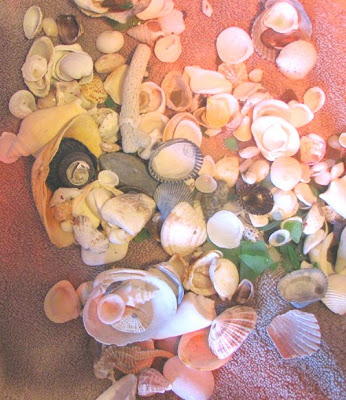 I grew up in Idaho, but my grandparents lived in Oregon and our trips to visit them usually included a trip to the beach. Some of these shells date back to those trips. 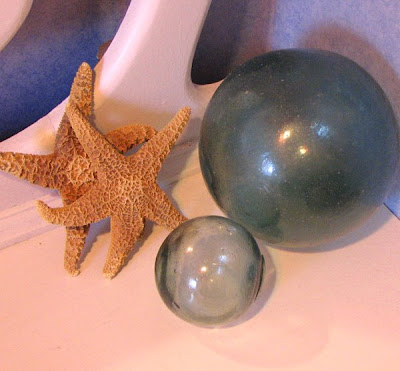 Back in those days it was still possible to find the green glass floats from Japanese fishing nets that washed up on the beach. My grandparents had a bunch of them. The large one in the picture was one my mother had. I don't know if she found it or bought it. You could buy them in the gift shops along the coast for pretty cheap. The small one is one that I found with my grandfather. To this day I don't know if he planted it for me to find, or if we really found one that had just washed in. It is rather unusual in that it has a little bit of water inside it. It is a mystery how it got there and it is still there after probably 50 years. The starfish (or sea stars as they are now called) were gathered from the beach on one of our trips. You could do that back then. Nowadays it is illegal to remove them from Oregon beaches if they are alive. I still remember how bad they smelled in the car on the trip home. They slowly lost all their color. I think one was purple and one a coral color originally. 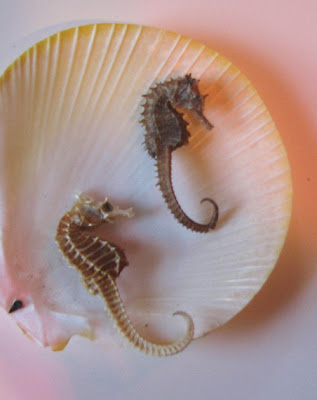 I don't remember where the two little seahorses came from. I suspect they were a childhood purchase from one of the Oregon giftshops on a summer trip. 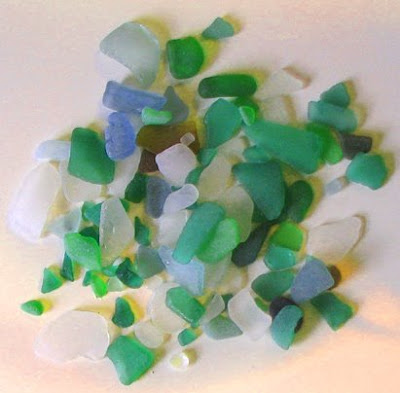 For years I picked up beach glass. This is a handful of my collection. I love the frosty look, cool colors and smoothed off edges, even though I know it is essentially litter. I continue to look for it, but I haven't found a single piece in quite a few years now. I think I found most of this on the southern Oregon coast when we lived in southern Oregon. Maybe there is something different about the northern coast and beach glass. Or maybe it is reflection of the fact that most of our soft drinks are now in cans or plastic bottles. I miss it. Finding a piece was truly like finding a little gem among the rocks and debris. Is there still beach glass out there, somewhere?
Posted by Terry Grant at 4:47 PM