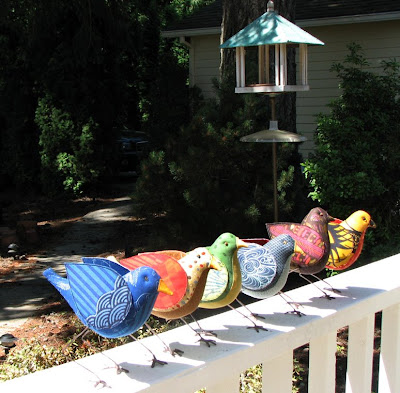 I took the birds that I have finished this week outside to pose them in the sunshine. It was almost too bright for a good photo, but here they are. The yellow, black and red bird at the end of the line is the one I used some of my African fabrics for. I really love how he turned out. So much that I used some more of my African fabric stash for the one next to him. The gold and red fabrics seem quite typical of African fabrics, but the ones I used for the second bird, not so much. The two main fabrics are quite an unusual color scheme of chocolate brown, purply pink, coral and accents of metallic gold. As I've said before, choosing the fabrics is the best part of the process. The other part I really enjoy is watching the personalities of these birds emerge, without much control on my part. One will develop with his head slightly tilted to one side, much like a real bird, another will balance only if I stretch the legs a bit and make him stand up very tall. Some, like the blue one, seem just about to fly away. 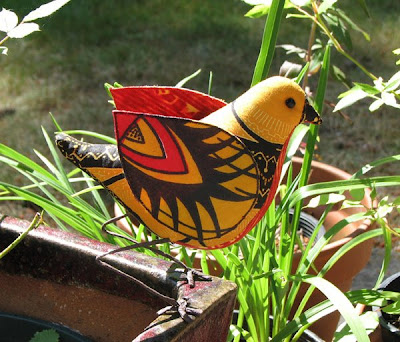 Here is a closeup of the African fabric bird. I guess he is a special favorite of mine. I think he will be named Joseph. Remember the Paul Simon song "Under African Skies"? Have you figured out that I am naming them in alphabetical sequence? It will help me keep track of how many I have made and sold and is much better, in my opinion, than giving them numbers! I have to think a little bit about, not only names starting with the next letter, but which one suits the bird. This Joseph's face is not "black as the night" but perhaps he does carry a little spirit of Africa within him. And how do I know if the bird is male or female? Well, I just know.

P.S. Here is one of my favorite versions of the Paul Simon song—a duet with Miriam Makeba.