I know the weather is a pretty boring topic, but I can't think of much else right now. We are in the middle of a heatwave here in Portland. We seldom have really high temperatures and we usually brag about how pleasant Portland summers are, but this week we are sweltering. 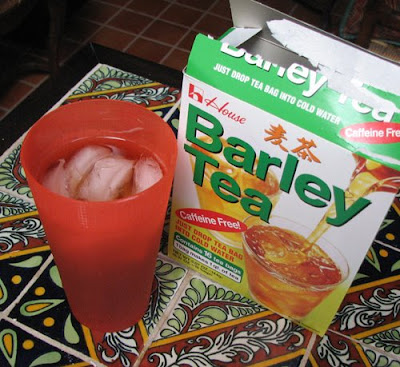 I am staying indoors and drinking cold beverages—mostly ice water and iced tea. It really does help. I moved on this afternoon from regular iced tea to iced barley tea. Have you ever tried it? I learned about it when it was served at the opening reception for one of our High Fiber Diet Japanese Garden shows. Not really tea, it is a tisane made from roasted barley. It has a nice nutty flavor that reminds me a bit of toasted sesame seeds and is quite refreshing, non-caffeinated and not as tannic/acidic as black tea. It is common in Japan and supposedly increases the fluidity of the blood (whatever that means) and decreases stress. I drink it because it quenches my thirst and keeps me hydrated. I buy it at Uwajimaya in Beaverton.

We do not have air conditioning, so I close up the house in the early morning, then open up windows later when the outside temperature is cooler. It's pretty hot. My outside thermometer reads 110°, but it is right in the sun. I think it is only about 107° F! A bit cooler inside. I'd love to go find someplace air-conditioned to hang out, but I am trying to finish a project with a deadline. I am making birds and writing instructions and drafting a pattern. The bird pattern will be published in a magazine later this year, which is exciting! I will let you know more details, closer to its publication. Meanwhile I am writing and sewing and moving slowly and drinking cold beverages and hoping today is the peak of the wave. Here's a little bird preview. 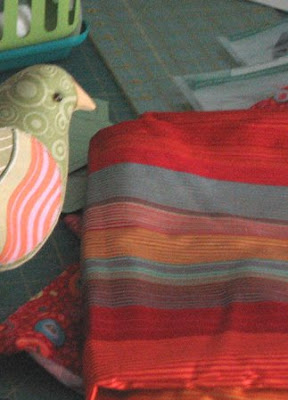